The boat crash happened in the northernmost section of the Florida Keys, Elliott Key. (Google Maps)

The boats were headed back into dock when they crashed at about 6:30 p.m. A 36-foot Carrera powerboat carrying 16 people hit a boat with two people aboard. The powerboat was towed back to the Black Point Marina in Cutler Bay, but the second boat sank and could not be salvaged.

According to a statement from the Florida Fish and Wildlife Conservation Commission, of the 10 people that had to be taken to the hospital, three people suffered from serious injuries and one person was airlifted to the Kendall Regional Medical Center.

A cause of the crash has yet to be determined. 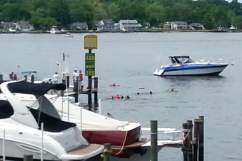