Glenn Greenwald has become the focus of scrutiny after breaking the story that the NSA was collecting millions of Verizon customers’ phone records.

1. He May be Investigated for Leaking Classified Information

In an ironic twist, Greenwald, who has been a passionate critic of the Obama administration’s unprecedented crackdown on whistleblowers, may soon find himself the subject of a Department of Justice investigation regarding his own recent reporting.

In his reporting, Greenwald published a top secret order by the Foreign Intelligence Surveillance Court that granted the FBI the authority to collect the phone records.

I don’t welcome leaks, because there’s a reason why these programs are classified.

However, Greenwald, on MSNBC, seemed to welcome the scrutiny, saying, “Let them go and investigate.”

2. He Has Been a Consistent Critic of the Obama Administration’s Anti-Terror Policies

Greenwald is known for his long lawyerly columns offering analysis and criticisms that take aim at what he views as government encroachment on civil liberties and constitutional balance of powers. A former attorney, Greenwald often employs complex legal arguments, interviews, and multiple references in his opinion writings.

Eschewing ideological labels, Greenwald has been an equal opportunity offender, criticizing both Democrats and Republicans. And though often associated with the left, he has been a persistent and vocal critic of many of the Obama administration’s policies, from drone strikes to the administration’s handling of detainees at Guantanamo Bay.

3. He Left His Popular Column at Salon and Moved to The Guardian

Greenwald ran a wildly popular column at Salon where he maintained full editorial control, and, last year, made the move to become a columnist and writer for The Guardian. The leave was not a bitter split, however. As he told Talking Points Memo:

It’s fun to leave a place when you’re dissatisfied and dislike the people you work, but it’s incredibly hard to do when you love where you’re at and respect the people you work with … My Salon situation was definitely the latter, so it was not an easy decision. But I think it’ll really help maximize the impact of my work, and I try to have that be my guiding consideration.

4. He Lives in Brazil

Greenwald moved to Brazil in 2004 where he lives with his Brazilian boyfriend David Michael Miranda in Rio de Janeiro. Greenwald told Out Magazine in 2011:

Brazil recognizes our relationship for immigration purposes, while the government of my supposedly ‘free,’ liberty-loving country enacted a law explicitly barring such recognition.

5. He Loves Dogs and Has Saved Many From the Street

Some of Greenwald’s dogs as of 2009. From left to right, Bolinha, Enzo, and Pulo, and in the back, Uli. (Via Facebook)

He is an unabashed lover of the canine species and has a tendency to adopt stray needy dogs from the Rio streets, much to the consternation of his boyfriend. He has, at times, owned more than 10 dogs at once. 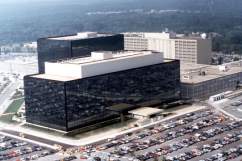 NSA Spying Scandals: 8 Editorials and Opinions You Should Read