NBC News has learned that under the post-9/11 Patriot Act, the government has been collecting records on every phone call made in the U.S.

This revelation comes just a day after the Guardian broke the news that NSA had been collecting date on phone calls made through Verizon. 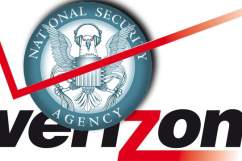 In 2011, two Democratic Senators Mark Udall of Colorado and Ron Wyden of Oregon warned that the Justice Department were twisting the Patriot Act in a way that the congress didn’t understand.

I want to deliver a warning this afternoon: When the American people find out how their government has secretly interpreted the Patriot Act, they will be stunned and they will be angry.

Udall backed him up by saying:

Americans would be alarmed if they knew how this law is being carried out.

The business records section of the Patriot Act had been set to expire, along with provisions allowing the F.B.I. to obtain “roving” wiretap orders to follow suspects who change phone numbers, and to obtain national security wiretaps against noncitizen terrorism suspects who are not connected to any foreign power.

President George W. Bush as he remarks on the Patriot Act during the Pennsylvania State Association of Township Supervisors conference April 19, 2004 in Hershey, Pennsylvania. During his speech, Bush stressed the need to renew the Patriot Act before it expires next year. (Photo by William Thomas Cain/Getty Images)

The scribe of the original incarnation of the Patriot Act in 2001, Rep. Jim Sensenbrenner, R-Wisconsin, told Fox News this evening, that seizures such as these were “never the intent” of the act. He added, “this is a big deal. A really big deal.”

Loading more stories
wpDiscuz
0
0
Would love your thoughts, please comment.x
()
x
| Reply
NBC News is reporting that every phone call in the United States has been monitored by the government since the passing of the Patriot Act.