Chinese sex predators may think twice after they scope the caveman legs being sported by young women. ChinaSMACK has reported that young women are now using “hairy leg” stockings to ward off would-be pervs and sex offenders.

User Happy张江 posted the above photo to micro blogging site Sina Weibo with the tag line:

“Super sexy” indeed. Some are questioning the authenticity of the hairy leg stockings, but it’s also wide-spread knowledge that nothing repels a perv faster than a woman who decides to go au naturel. Why not take it up a notch, how about a hairy chest sweater or some hairy palms gloves. Let these would-be sex offenders that they picked the wrong sasquatch to grope.

This isn’t the first anti-rape invention to come out of Asia, earlier this year India debuted its electric shock undergarment. Let’s say some creeper lunges with arms out like a horn-dog zombie, once he grabs the chest he’s given an electric shock that will let him know his advances are unwelcome. 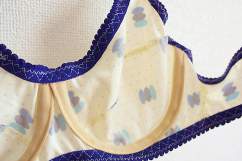 As weird as hairy leg stockings and electric shock bras are they’re not the strangest defense tactic for women to consider in fighting off sex predators. A doctor in South Africa invented an anti-rape condom. Dubbed the “Rape-aXe” the condom has jagged barbs inside it that hook on to the rapist’s junk, and once attached can only be removed surgically by a doctor.

It hurts, he cannot pee and walk when it’s on. If he tries to remove it, it will clasp even tighter.” – Dr. Sonnet Ehlers

Yes, technically the woman still gets violated and has to convince her offender to wear a condom, which could be easier said than done, but medieval prophylactics have their downsides.

Loading more stories
wpDiscuz
0
0
Would love your thoughts, please comment.x
()
x
| Reply
Some women in China may soon have the ape legs of a 50-year-old Italian man.