Ladies and gentlemen, it happened, Hillary Clinton has created a Twitter account. The account @HillaryClinton is verified and already has one tweet! Her profile picture, cover photo, and first tweet all poke fun at the meme that has blown up on the Internet “Texts from Hillary.” This afternoon she tweeted at the two people responsible for the meme, Adam Smith and Stacy Lambe, and thanked them for the inspiration officially changing the meme from “Texts from Hillary” to #tweetsfromhillary. Just two hours after her first tweet, she already has over 100,000 followers.

She also calls herself a “hair icon” and a “pantsuit aficionado.”

Could this be an attempt to connect with youthful voters in the wake of presidential run rumors? The final entry of her Twitter bio does say “TBD…” 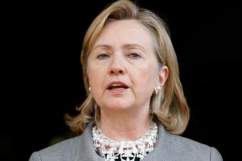