In a display that only proves that presidential elections begin earlier and earlier every term, Democratic Senator from Missouri Claire McCaskill has already endorsed Hillary Clinton for president in 2016…before Clinton has even expressed interest in running.

McCaskill, who was a big supporter of Obama’s 2008 presidential campaign, gave a written statement to Ready for Hillary, a money raising organization. The statement said:

In 2008, I was an early supporter of the then-Senator Obama’s campaign. I worked my heart out to elect him President. Now, as I look at 2016 and think about who is best to lead this country forward, I’m proud to announce that I am Ready for Hillary.

This premature endorsement comes just around a week after Hillary Clinton created a twitter account that already has over half-a-million followers. In the bio for her account, Clinton’s last entry is listed with a tantalizing and and open-ended “TBD…”

These efforts could be coming as a push from the Democratic party to preemptively distance 2016 presidential front runners from the currently scandal-filled Obama administration. 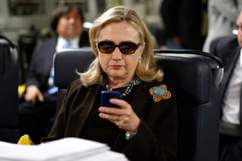