The New York Fire Department are on the scene at the Hearst Tower on 57th street and 8th avenue in Midtown Manhattan where two window cleaners have become trapped.

It appears as though their window cleaning elevator became tangled and buckled.

The FDNY have attached safety ropes to each of the workers. 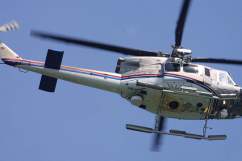 Read More
Breaking News, New York
Two window cleaners have become trapped 45 stories up on the Hearst Tower. The FDNY are on the scene to begin a rescue operation.