In the midst of the Boston Bombing, the New York Post printed a an article with two men plastered on the front under the title “Bag Men: Feds Seek These Two Pictured at Boston Marathon.” The problem with this was that the two casually dressed marathon spectators printed on the front page were not the Tamerlan brothers but two innocent Massachusetts residents who left the finish line area area hours before the fatal blast. Now 16-year-old high school student Salaheddin Barhoum and his 24-year-old running buddy Yassine Zaime are suing the paper for libel and invasion of privacy. In a civil action filed in Massachusetts, the two accuse the newspaper of publishing “their photographic images, together with false, inflammatory and libelous assertions concerning plaintiffs’ involvement in the April 15, 2013 Boston Marathon bombing.”

Though the accompanying article to the Post’s “Bag Men” frontpage carefully stated that investigators were “ciculating photos of two men spotted chatting near the finish line” — the dramatic title page gave a condemnatory first impression.

Following the Boston bombing, the police and the world was looking for suspects. Zaiman and Barhoum are not the only innocent people realed into unofficial investigations. Sunil Tripathi – a Brown Student who was missing at the time of the Bombing was victim to spreading and inaccurate speculation on sites such as Twitter and Reddit that pegged him as the bombing suspect. Tripathi’s body was found weeks later in the Providence river after an apparent suicide. 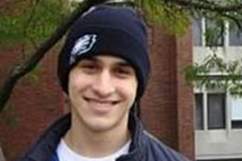