Hernandez being escorted from his home in Massachusetts (Getty Images)

On Wednesday, June 26, New England Patriots player Aaron Hernandez was charged with the murder of his acquaintance, Odin Lloyd.

The NFL player, who had recently singed a five-year contract with his team (which included a $12.5 million signing bonus), was escorted out of his house in handcuffs as the world watched in dismay.

But this is just the latest crime-related scandal for the NFL, a league that’s been plagued with a slew of crimes ranging from DUIs to domestic violence and, of course, murder.

Here is a list of 10 other NFL stars, all convicted or accused of terrible crimes, whose promising careers were arrested (pun intended) once justice caught up to them.

Little was a star player in college and was drafted as an All-American into the NFL in 1998. The same year the North Carolina native started playing for the big leagues, Little left a birthday party drunk and decided to drive home anyway. In an inebriated state, the St. Louis Rams player drove through a red light, crashed into a vehicle, killing a mother and two children. Little was lucky and didn’t go to prison but instead received four years probation and 1,000 hours of community service.  In 2004, Little was arrested again for driving drunk upon failing three roadside sobriety tests. He was sentenced to two years probation.

Rae Carruth may have committed one of the most shocking crimes on this list.  The Carolina Panthers player hired his friend to conduct the execution-style murder of his girlfriend — Cherica Adams — who was eight months pregnant with his child after refusing to get an abortion. When she was driving near his home, the NFL star stopped his car in front of hers while his hit-man friend shot into the car, hitting Carruth’s pregnant girlfriend five times. Both cars fled the scene. Unfortunately for Carruth, Adams survived the shooting for a few minutes, enabling her to call 911 and tell authorities what happened. Then she died. So did the baby. He is currently serving a 24-year sentence.

Chris Terry was arrested for beating his wife. They may not come as a surprise considering many NFL stars have been convicted of the same thing. But it’s the way Terry brutally assaulted his wife that has placed him on this list.  According to reports, Terry slammed his wife into a wall, head-butted her and stuffed her face into a pillow. If that wasn’t enough, their two children witnessed the entire thing. In 2010 Terry was booked into jail after being charged for dealing cocaine, driving while intoxicated, resisting law enforcement, and possessing a fire are without a permit.

Ray Lewis, recently retired linebacker for the Baltimore Ravens, was indicted for murder along with two friends in early 2000. During a Super Bowl party Lewis and his friends got into an altercation with two men who were later stabbed to death. Lewis became a prime suspect after blood was found on his suit as well as in his limo. After being indicted on two counts of murder, Ray went to trial and had all counts dropped. The murder remains unsolved. Some sources claim Lewis allegedly paid off the family of the murder victims in an out-of-court settlement. He was charged with obstruction of justice over misleading comments he made to the police and served one year probation.

Alonzo’s case is particularly bizarre. The defensive lineman for the Chicago Bears terrorized passengers on a commercial flight and literally forced the airline to make an emergency landing. Spellman, who was later committed to a psychiatric hospital, allegedly yelled about the possibility of a crash, cursed at a female passenger, and threatened to smash a flight attendant’s head with this cleats while the plane was in midair. The tirade continue throughout the flight and the plane’s pilot was granted permission to land at Philadelphia’s International airport. After the plane landed, he refused to disembark and repeatedly threatened the pilot.  Spellman was allowed to walk free after the flight but was arrested after a second disturbance at his brother’s home. Spellman has also been charged with weapons charges and DUIs. Spellman’s erratic behavior is believed to be connected to bipolar disorder.

Unlike his teammate O.J Simpson’s case (don’t worry, he’s on this list), Dunaway’s wife-murder case was not highly publicized. Before her death, ex-Mrs.Dunaway had won a divorce settlement that gave her 800 acres the coupled owned, $1,800 a month in alimony payments as well as half of Dunaway’s NFL pension. In 1998 Nonniel Dunaway was found dead in a half-empty swimming pool. Although Dunaway was not indicted for the charges, his children filed a wrongful death lawsuit alleging their father was responsible for their mother’s death. Lets recap: His own children sued him and blamed him for their mothers death. In 2002, Dunaway was found liable and was forced to pay $579,000 to his children.

Russell was allegedly so into ecstasy, the NFL banned the Oakland Raiders and Washington Redskins player indefinitely. During Russell’s suspension in 2002, he was accused of videotaping the rape of a woman who had been drugged with GHB. The woman told police she believed Russell had slipped her the date-rape drug at a bar. The videotape was found and seized during a search of his home.  The case was dropped dropped because prosecutors believed the jury would not convict him. Three years later, Russell died in a car crash.

The Philadelphia Eagles quarterback (with the Falcons at the time) led and hosted a dog fighting ring in his house in Virginia called “Bad Newz Kennels“. The case drew widespread publicity to the issues of animal abuse and dog fighting. Vick and his buddies were charged with their involvement in dog fighting, gambling and brutal executions of dogs. Publicity details showed that some dogs were hung, drowned, electrocuted and shot. He served 23 months in jail.

Vick’s fighting dog Lucas was euthanized this year at the sanctuary he was living. He could not be put up for adoption due to his fighting history.

Atkins was first arrested for allegedly firebombing a business partner. But that’s not why the Miami Dolphins safety is on this list. After being acquitted, he shoved, choked bit and beat his wife with a remote control. That’s not all. When cops arrived at his home, he allegedly punched an officer in the throat, wielded four knives and had to be taken down with a taser gun. Atkins claims he has dementia caused by brain trauma suffered during his playing career.

In one of the most publicized trials in American history, OJ Simpson was found not guilt of brutally murdering his ex-wife and her boyfriend, although in the public view, much of the evidence indicated otherwise. Think what you want of the case, OJ Simpson’s innocence has always been questioned. Exactly 13 years after the player/actor , was found not-guilty O.J was convicted in a robbery case in which a group of men led by Simpson stole sports memorabilia from a Las Vegas hotel…at gunpoint. He was found guilty of all 10 charges and was sentenced to 33 years in prison. 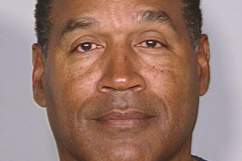 OJ Simpson Gay? Has Posse of ‘Girls’ in Prison

Loading more stories
wpDiscuz
6
0
Would love your thoughts, please comment.x
()
x
| Reply
Aaron Hernandez isn't the only football star who's been charged with murder. He joins an infamous fraternity of NFL outlaws.