President Obama was on Air Force 1 about to kick off his tour of Africa, but that did not stop him from calling Kristin Perry and Sandra Stier to congratulate them for the dismissal of California’s Prop 8.

Perry and Stier are the couple who kicked off the challenging of Proposition 8, which banned gay marriage in California, in May 2009 when the two were denied a marriage license. In wake of the Supreme Court’s decision to reject Proposition 8, President Obama called from halfway across the world to congratulate the happy couple. Watch the heartwarming video above. 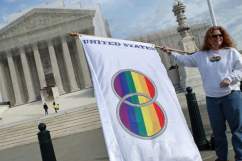 Loading more stories
wpDiscuz
0
0
Would love your thoughts, please comment.x
()
x
| Reply
Barack Obama called Kristin Perry and Sandra Stier from Air Force One to congratulate them for the Supreme Court's rejection of Prop 8. The two challenged the law back in 2009.