At long last, the sole winner of Powerball’s largest ever jackpot has come forward.

After hiding in the shadows since her May 18 win, the golden ticket holder has identified herself as Gloria MacKenzie of Florida, age 84, who hit it big in the $590.5 million drawing.

Wearing blue-blocker wraparound shades, the delicate senior citizen clutched her son Scott’s arm as she left the Florida lottery office this morning, ducking out before the hubbub of a live-streamed press conference to announce the winner. Florida law forbids jackpot winners from remaining anonymous, so the winner had no choice but to enter the public eye.

Here’s what you should know America’s luckiest lady …

1. A Kind Woman Let Her Step in Front of Her to Buy the Winning Ticket

An unidentified woman who let MacKenzie butt in line must be kicking herself, because MacKenzie’s auto-generated Quick Pick ticket could have gone to the good Samaritan.

That woman also was prepared to buy a ticket, but let 84-year-old Gloria step in front of him to be served first. Florida Lottery head Cynthia O’Connell told reporters that MacKenzie said:

…another lottery ticket buyer was very kind enough to let me go ahead of her.

MacKenzie also bought four other, less lucky, tickets for the May 18 drawing.

2. She’s a Widow From a Mill Town in Rural Maine

MacKenzie is originally from East Millinocket, Maine, known locally as “The Town That Paper Made.” Her husband, Ralph, died in 2005. Here’s his obituary, via The Bangor Daily News:

2. She Has Four Children

According to the obituary, there are four heirs to MacKenzie’s newfound fortune: Larry, a town selectman in East Millinocket, Maine; Scott; Melinda, a teacher; and Jamie. Gloria and her husband also suffered the los of one son, Richard.

4. She Lives in an Extremely Modest Home

CBS’ Tim Williams tweeted the above photo of MacKenzie’s home in Zephyrhills, Florida.

Meanwhile, a white pages search of MacKenzies in Zypherhills, Florida, gets you the address of a Ralph L. Mackenzie, which matches the name of her husband. The phone number white pages lists matches that of a search conducted with the name Gloria C. Mackenzie, also in Zypherhills, Florida. According to Yellowpages, the two lived at 5825 Broadmore Street, Zephyrhills, Florida. propertycrunch.com shows that houses on Broadmore Street are modest homes that sell at the median price of $64,971 as of May 2013.

But the number on the door of the house in the photo above does not match this address.

5. She Bought the Ticket at Publix Supermarket

The golden ticket was purchased in a Publix supermarket in the town of Zephyrhills, Florida, on Gall Boulevard — a city of 13,337 residents located some 30 miles northeast of Tampa — known for recreational sports like skydiving.

6. Her City’s Entire Budget is a Fraction of Her Jackpot

Known as home to the Zephyrhills bottled water company, the city’s entire yearly budget of the city is a fraction of the jackpot: $49 million.

Zephyrhills, population 13,337, is about 30 miles northeast of downtown Tampa. Like many Florida communities, it features a small, old-timey downtown strip where restaurants, gift shops and clothing stores sit under a canopy of oak trees. Around the city’s perimeter, there’s the suburban sprawl of big box stores. It was in that sprawl, at a Publix supermarket, where the winning ticket was sold.

It likely comes as no surprise that an 84-year-old was less interested in 30 yearly installments of the full jackpot than in receiving a lump sum of half the payout. Her payment is before taxes.

The Tampa Bay Tribune says she went to Tallahassee to pick up the money with her son, Scott, and two lawyers driving in a humble silver Ford Focus.

8. She Wins the Largest Powerball Jackpot in History

At $590.5 million, Saturday’s drawing awarded the largest jackpot in Powerball history. It was the second-largest lottery jackpot in American history, after the $656 million Mega Millions jackpot awarded in April 2012. That Mega Millions pot was split among three winners, while there is a single winner in this drawing — making it the single most valuable winning lottery ticket ever. The winning numbers were were 10, 13, 14, 22, 52, Powerball 11.

Talk about beating the odds. The winner purchased the only winning ticket, selecting the matching numbers from a possible 175 million combinations. Odds were good, however, that someone would win the jackpot after lottery officials reported that 80 percent of all possible combinations had been purchased before the drawing. 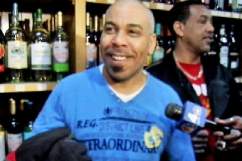 The pool was so massive that non-jackpot winnings totaled more than $84 million — including 33 $1 million winners in 17 states and two $2 million PowerPlay winners in New York and South Carolina.