Demonstrations have turned violent in the Turkish cities of Istanbul and Ankara, after thousands of people have engaged in several days of anti-government protests sparked by a construction project to change Taksim Gezi Park into a shopping mall and replica of an Ottoman-era military barracks.

1. The Protests Have Turned Into a Movement Against the Prime Minister

The protests have expanded the scope of focus from anger over the park redevelopment project to widespread defiance against Prime Minister Recep Tayyip Erdogan and his conservative government.

Erdogan, who is also chair of the Islamic-leaning, conservative Justice and Development Party, has been in power in Turkey for more than 10 years. The protestors have cited many grievances against Erdogan, such as what they see as the government’s increasing move toward more authoritarian and Islamist policies, reported the New York Times.

This has become a protest against the government, against Erdogan taking decisions like a king

Erdogan has not backed down, however, appearing on television Saturday to call for an immediate end to the protests and declare that the redevelopment project in Gezi Park will continue.

What started as peaceful sit-in demonstrations has turned into violent clashes after the police attempted to clear protestors out of the park by firing tear gas canisters and blasting streams from water cannons into the crowd. So far, about 60 people have been arrested and more than 100 have been injured, according to Al Jazeera. 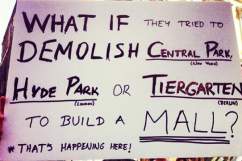 3. The Protests Started with Environmentalists

You can see Taksim Gezi Park here: Gezi Park is a small green space surrounded by buildings and concrete in the middle of Istanbul and is considered one of the last green spaces in the city. Protestors claim the plan to redevelop the park would essentially pave over the green space and replace it with a shopping mall, though, according to Turkey’s Hurriyet Daily News,  the mayor of Istanbul has claimed that the project is “simply the mandatory removal and transfer of trees in the area in order to enlarge the pedestrian walk,” whatever that means. The protests effectively started last Monday when government officials began removing trees. One protester told Al Jazeera:

It started with us defending the last bit of green space we have left. We have been gassed, we have been clubbed, and we have been hospitalized.

A court in Istanbul on Friday ordered the temporary suspension of the plan to remove the trees.

4. The Protesters Are a Diverse Bunch

A message from around the world: #Turkey you are not alone. #occupygezi – twitter.com/sondakika_habe… — Anonymous (@AnonOpsLegion) June 1, 2013

The movement has spread beyond just environmentalists to include a diverse assortment of people from many different economic, religious and political backgrounds. The Guardian reports that the protestors range from the old to the young, Turks to Kurds, and liberals to conservatives.

5. Some of the Protesters are Calling This Occupy Gezi

Hundreds of people, including many Turkish Americans and members of the Occupy Wall Street movement, protest in Zuccotti Park in solidarity with demonstrators in Turkey. (Platt/Getty Images)

Many of the protestors have appropriated the rhetoric and style of the Occupy movement. As of May 31, #OccupyGezi has seen more than 600,000 mentions on Twitter, according to Topsy analytic reporting.

Loading more stories
wpDiscuz
0
0
Would love your thoughts, please comment.x
()
x
| Reply
Demonstrations have turned violent in Istanbul and Ankara, after thousands of people have engaged in several days of anti-government protests sparked by plans to change Gezi Park into a shopping mall.