Update 7:01 p.m.: According to CBS’ John Miller, the shooter has been confirmed dead:

A gunman wreaked havoc on and around Santa Monica College’s campus this afternoon, and the aftermath has left as many as seven people dead, including the shooter, though two or three more are in serious condition.

All seven of the deceased were shot, including two people found burned inside a house.

The shooter appears to have fled to Santa Monica College after setting fire to a house eight blocks away. The fire was part of a break-in attempt gone awry, and was followed by a violent car jacking (where he opened fire and wounded a woman in the arm) and an even more fatal ride to Santa Monica College’s campus, where he shot at innocents again.

ABC sums up the body count nicely in this tweet:

At a home near the campus – 2036 Yorkshire Ave. – two people were found dead in a burning house. The suspect left the scene and car jacked a vehicle, opening fire in the process of that theft, and again en route to the school.

Three more were killed as he fired on the open road (the Cloverfield/Pico and 19th/Pearl victims), and one more was killed on Santa Monica’s campus (but died at UCLA’s hospital). The shooter was killed as well, although there’s an additional person of interest, one Michael Lin, in custody .

ABC broadvasted this photo of what appears to be a dead body on Santa Monica’s campus. Per the description of the shooter’s outfit, this could very well be him:

KABC is broadcasting an image of what appears to be a dead body at Santa Monica College – twitter.com/MatthewKeysLiv…

The suspect is believed to have used an AR-15 weapon in the murders.

2. Of the Three Wounded at Santa Monica College, One Has Died and Two Are in Serious Condition

According to KABC, three victims were shot and found in a vehicle a block and a half away from the school on East 21st Street.

Officials @uclamedical say they are treating 3 victims from #SMC shooting, 2 in critical, 1 in serious condition. cbsloc.al/11Ks8UX

Students reported hearing multiple gun shots coming from a shot gun and a handgun. Sam Luster, a student who was about to give a presentation in the school’s library, told ABC 7:

We didn’t know what was happening until all the students at the entrance of the library started running down towards the bottom of the library.

Witnesses told Heavy.com about the horrifying scene at the shooting, one source says:

I heard gunshots, I was buying scantrons and selling my books. I heard two, maybe three gunshots. And then everyone started running. I’m right across the street on 17 from the campus.

Most recently, UCLA’s Medical Center, where the victims were taken, announced that one on-campus victim had died, while the other two are in serious condition: 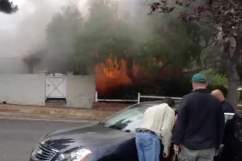 3. Obama Was in the Area

President Barack Obama was in the area this afternoon attending a DNC fundraiser just a few blocks from the college.

Students of the college had been hopeful that Obama would be able to squeeze a visit to the college in. The LA Times reported yesterday that Santa Monica College student Elias Saigali had sent POTUS an invited to attenD the Phi Theta Kappa honors society ceremony. As of yesterday, Saigali wasn’t giving up hope that Obama might arrive, he told the Times:

I’m hoping we still have a shot.

#Breaking Shooting in Santa Monica is delaying President’s arrival in the Valley. Currently now in route to LAX via motorcade

Per the Huffington Post, secret service spokesman Edwin M. Donovan said, “We are aware of the incident and it is not impacting the [President’s] visit.”

4. The College Was Locked Down Due to a Threat in May

Three weeks ago, a 19-year-old man was arrested in connection with shooting threats made against six area schools. The suspect reportedly called into authorities and threatened “to shoot up” an unknown school. The anonymous caller claimed to be a student at Santa Monica College and said the shooting would happen at 8 a.m.

Police traced both cell phone calls to locations near the campuses. The suspect was found on inside the campus’ Psychiatric center. The student was unarmed and claimed he was suicidal and intended to shoot other students, according to Santa Monica Police. 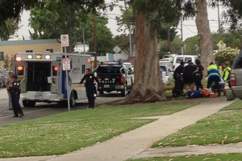 5. This Was NOT a Traditional School Shooting

In a televised interview, the Santa Monica College Police Chief made it clear that this started as a home break-in and devolved into a school shooting.

Santa Monica College Police Chief: “this is not a school shooting, and began off campus”

The motive behind the day’s events has yet to be elucidated, and is sure to be further explored in the coming days. But for now it appears Santa Monica College was not a pre-ordained target, but rather a potential safe-haven for an armed lunatic on the run.

Loading more stories
wpDiscuz
0
0
Would love your thoughts, please comment.x
()
x
| Reply
A shooting has occurred at Santa Monica College in California. The shooter is reported to be down, there are apparently multiple victims.