Sarah Harrison, one of Julian Assange’s young disciples, has been sent by Wikileaks to help guide NSA whistleblower Edward Snowden to asylum and safety. Harrison serves under the former Spanish Judge Baltasar Garzon on the Wikileaks Legal Defense team. She is currently traveling with Snowden trying to guide toward political sanctuary. She reportedly left the Moscow airport with Snowden on August 1, 2013 as he began his one year temporary asylum in Russia.

Here’s what you need to know about the woman at the center of this international intrigue:

1. She is Described as a Close Adviser to Julian Assange

The media refers to Harrison as one of Julian Assange’s closest advisers. Evidence of Harrison’s connection to Wikileaks goes back to late-2010, and her connection has not been severed since.

2. Harrison is a Section Editor for Wikileaks.org

Harrison serves as a section editor for Wikileaks.org . Specifically, she was assigned to Wikileaks just before the launch of their Afghan War blog titled “Afghan War Diary, 2004-2010.”

3. She is Currently Accompanying Edward Snowden

Above is a video taken at the Moscow airport of Harrison sitting beside Snowden as he speaks to international human rights groups.

Harrison has been dispatched to accompany NSA whistleblower Edward Snowden as he searches for political asylum from the United States. The two were last seen in Russia where they were expected to board a flight to Havana, Cuba. The two missed their flight despite the fact that seats 17A and 17C were supposedly meant for them. See the photo of those seats below:

Standing next to Edward Snowden's seat on flight to Cuba. He ain't here. pic.twitter.com/NVRH3Pzved 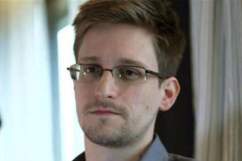 After Assange’s arrest, his staff and supporters raised £93,500 for his bail. Under the conditions of the bail, Assange was not allowed to leave the country, a rule that he violated when he sought asylum in the Ecuadorian embassy in London. Because of this move, all of the bail money was claimed by the British government, leaving many of Assange’s supporters without large amounts of cash. UK’s The Sun, lists Sarah Harrison as one of those supporters who lost money, specifically citing her as having lost £3,500.

5. Assange Was a ‘Pied Piper’ for Friends and Female Interns

Harrison started out at Wikileaks as a journalistic intern from the Centre for Investigative Journalism. During Julian Assange’s time under house-arrest in December of 2010, the Australian called him the “Pied Piper” because of his ability to make new friends. The article said he surrounded himself with young journalism students who worked, “12-15 hour days, seven days a week.” The article seems to raise suspicion over his particularly close relationship with two female interns, Sarah Harrison and Isabelle Fraser.

The Times of London reported in 2010 that in addition to her duties as an intern journalist for Assange, Harrison was tasked with, “organizing his diary and washing his socks.”

7. Harrison is a Citizen of the UK

According to her profile on Wikileaks, Sarah Harrison is a UK citizen. She went to college at City College in London, and a Daily Mail article from December of 2010 described her as a “recent graduate.”

From The Centre for Investigative Journalism.

9. The Guardian Called her a “Strange Choice” For Snowden’s Companion

Dominic Rushe, a writer for London-based publication The Guardian, said that Harrison may seem like a strange traveling companion for Snowden due to her lack of legal expertise:

Despite her closeness to Assange, Harrison may seem a strange choice to accompany Snowden, as unlike several people close to WikiLeaks – most notably human rights lawyer Jennifer Robinson – Harrison has no legal qualifications or background.

10. Her Wikipedia and Wikileaks Bios Were Created or Updated While with Snowden

Before the smears arrive, please read and learn who Sarah Harrison is: http://t.co/Evc0sFbHjz Courageous journalist and legal researcher.

Perhaps in anticipation of the notoriety and world attention Harrison would soon receive, her Wikileaks profile was updated to include more information the Sunday afternoon Wikileaks confirmed her association with Snowden. Likewise, her Wikipedia page was created just this morning by Wikipedia user “Commons sibi,” whose profile reads:

Hi , This is Sibi . I believe in Knowledge commons.