Scottie Pippen Was Arrested For Assaulting A Fan In Malibu (Getty)

News of Scottie Pippen’s supposed arrest has been breaking the Twitterverse apart as reports come out over his alleged assault of a fan in Malibu, who wanted an autograph. As typically happens when a celebrity causes controversy, the former Bulls star’s actions caused everyone to have a reaction. Here are the top 20 tweets from commentators, fans and everything in between about Scottie Pippen’s arrest.

Scottie Pippen arrested, Larsa is going to have to be in more Keeping Up With The Kardashian shows to pay the victim millions.

Note to self: if I ever see Scottie Pippen, don't ask him for an autograph.

Kobe wants 7 rings, because it has always been his aim to get at least one more ring than his eternal rival, Scottie Pippen. #Lakers #Bulls

Very disappointed to read recent reports on Scottie Pippen. Doesn't he know how bad this hurts six-year-old Me? #rolemodelfail

Scottie Pippen got arrested…. Word on the street is he used his big ass nose as a deadly weapon and knocked a dude out with it. 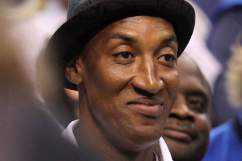 BREAKING: Scottie Pippen was arrested on felony assault charges. And yet, he's still projected to return to the #Bulls before Derrick Rose.

Scottie Pippen beat up some dude in a nightclub. He has felony charges brought on him. What is going on in the world!!!!!

Scottie Pippen, why? And what did the smart ass fan say when he told him no?

Are Scottie Pippen and Kanye West over doing it with the Paparazzi? It's funny how celebrities fight to be on… http://t.co/KofgFuaksN

Man, someone was dumb enough to pick a fight with Scottie Pippen? He may be up there in age but im sure he can still kick some ass lol

Scottie Pippen's shoes were classified as deadly weapons. You can't BUY that type of marketing!

Scottie Pippen got arrested for beating up some dude in Malibu. Probably pictured the guy was MJ #ISHOULDHAVEBEENTHESTAR #Scottiethoughts