Bales, 39, admitted in a military court that he shot some victims and burned others, many of whom were women and children asleep in their villages. He also acknowledged that there was “not a good reason in this world” for his actions. The plea guarantees that he will avoid the death penalty when the time comes for sentencing.

The sergeant said he carried out the murders with complete awareness that he was acting on his own, without compunction or mercy or under orders by a superior Army officer.

Bales murdered the civilians in two poor villages in the Panjwai district of Kandahar Province and as a result, hampered relations between the U.S. and Afghanistan as local villages erupted in protests.

The solider still faces life in prison with the possibility of parole, or life without parole.

“A prison sentence doesn’t mean anything,” said Said Jan, whose wife and three other relatives were slain. “I know we have no power now. But I will become stronger, and if he does not hang, I will have my revenge.” 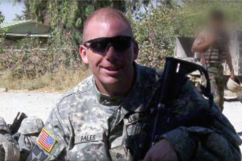 Read More
Afghanistan, Army, Crime, Military, Murder
The plea guarantees that the soldier will avoid the death penalty when the time comes for sentencing.