Here is Shaneah Jenkins with her sister, and Aaron Hernandez’s fiancee, Shayanna Jenkins.

Shaneah Jenkins is in a uniquely horrible position — mourning the loss of her love interest while her sister’s fiancee stands accused of murdering him.

New England Patriots tight end Aaron Hernandez is being charged with the murder of Odin Lloyd, the man who dated Shaneah Jenkins, his fiance’s sister. Shaneah Jenkins is the sister of Shayanna Jenkins, the mother of Hernandez’s baby.

Here is what you need to know about her:

Although there has been no confirmation directly from Shaneah Jenkins, many people have said and reported on the fact that Jenkins was the former girlfriend of Odin Lloyd. The 27-year-old Lloyd was a semi-professional football player from Dorchester, Massachusetts. It is not determined how the two met, but it is possible that they were introduced to each other by Lloyd’s alleged murderer Aaron Hernandez.

2. She is Shayanna Jenkins’ Younger Sister

Shaneah is the younger sister of Shayanna Jenkins, Aaron Hernandez’s fiancee and the mother of his daughter. The two have been together since high school and all through Hernandez’s college football career at the University of Florida. Shayanna lives with Hernandez and their 7-month-old daughter, Avielle Janelle Hernandez, in their home in North Attleboro, MA. Their house was the sight of the dramatic scene that unfolded earlier this week when the Hernandez opened the door shirtless only to find police officers waiting to arrest him.

3. She Went to High School with Her Sister and Hernandez

Shaneah, three years younger than her sister, attended the same high school as her sister and Aaron Hernandez and must have overlapped a few years there, according to her facebook. The school is Bristol Central High School in the central Connecticut town of Bristol. It is reasonable to believe that Shaneah knew Hernandez well as he dated her sister for many years, and his position as an older football star in Boston, would have put him in the perfect position to introduce her to an older semi-professional football player like Lloyd.

4. She Went to College at CCSU and Tunxis

According to Shaneah’s Facebook, after high school she attended Central Connecticut State University in New Britain, Connecticut. However, an article put out by Tunxis Community College in nearby Farmington, Connecticut also identifies a “Shaneah Jenkins” on a Dean’s List for 2010. 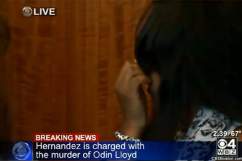 5. She Has Yet to Speak About the Murder

As the Hernandez case unfolds at a furious pace, there has been a surprising lack of comment from key players. Both involved Jenkin’s sisters have said relatively little about the case but, judging by Shayanna’s sudden decision to not talk to police and her presence in court, it would appear she is sticking by him. What could her sister think about that now that her boyfriend has been murdered?

6. There is Also a Third Jenkins Sister

With Shayanna as the oldest, and Shaneah as the middle child, there is also a younger Jenkins daughter. She was identified through Shaneah’s Facebook and multiple pictures.

7. Odin Lloyd Texted His Own Sister Before His Murder

New information has just emerged about the final text messages Odin Lloyd sent before his murder. Yahoo quotes the text conversation between Lloyd and his sister saying: 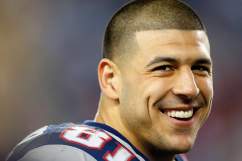 Aaron Hernandez Partied With Odin Lloyd the Night He Disappeared

A Facebook for a Carlos Ortiz in Bristol, Connecticut (that has the New England Patriots Logo as the profile picture) is identified as being friends with one “Littleman Jenkins,” who is also listed as being the uncle of the Shaneah and Shayanna Jenkins.

10. Hernandez Has a Bail Hearing This Afternoon

A bail hearing will be held this afternoon for Aaron Hernandez and we will be bringing you more information as the story, and case, unfolds.

Loading more stories
wpDiscuz
0
0
Would love your thoughts, please comment.x
()
x
| Reply
Shaneah Jenkins is the love interest of the murdered Odin Lloyd, and the sister of Aaron Hernandez's fiancee, Shayanna Jenkins. What is her involvement with the ongoing murder case?