The perils of divorce: he said-she said, custody battles, dividing of assets, and occasionally swapping accusations about which one of you conspired to poison the president.

Shannon Richardson, mother-of-five and an actress with bit parts in The Walking Dead and The Vampire Diaries, has been arrested in connection with the threatening letters containing ricin-like substance that were sent to President Obama and Mayor Michael Bloomberg.

If her name sounds familiar that’s because last week she alerted authorities to her New Boston, Texas home claiming her husband may have been responsible for making and sending the ricin letters.

1. It’s Not Yet Clear What She Will Be Charged With

It is not clear is she has been charged or what she might be charged with, but officials told CBS News that she her arrest is related to the ricin letter investigation.

2. Castor Beans Were Reportedly Found in Her Husband’s Car

The New York Post claims castor beans, which are the main ingredient used in the making of ricin, were found in her husband’s car.

3. Her husband claims she was trying to set him up

Nathaniel Richardson’s attorney John Delk has said his client was going the process of divorcing his wife and feels she tried to pin this crime on him, according to KTBS News.

4. She Was Pregnant With Nathaniel Richardson’s Child.

Though she has five children from previous relationships, she is said to be carrying Richardson’s baby and was noticably pregnant when she entered the courthouse, according to the New York Post.

5. The Letters Ranted About Gun Rights

According to CBS News, the letter to Bloomberg read:

You will have to kill me and my family before you get my guns. Anyone wants to come to my house will get shot in the face. The right to bear arms is my constitutional, God-given right and I will exercise that right till the day I die. What’s in this letter is nothing compared to what I’ve got planned for you. 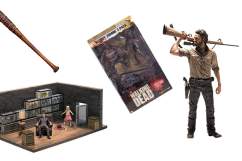