A teenage boy was bitten by a four foot shark at Surfside Beach in Texas on Monday, just a few weeks after a college student was attacked near the same beach, reports the Examiner.

The 15-year-old boy, who was bit on his left leg and and hand while swimming waist deep in the ocean around 2:45 p.m., was in stable condition on Tuesday. Zuandra Monnat, an emergency medical technician who happened to be at the beach at the time said the boy got bit on the hand while trying to fight off the shark.

“I hope this teenager grows up to be a cop and gets my back,” Monnat said. “He fought off this shark. It bit his leg and he literally tore this shark off of him and that’s how he got the lacerations to his hands.”

Robertson was spending the Memorial Day weekend at the beach with six of her friends when she and her friend Shelby ventured about 50 yards into the ocean around 3 p.m.

“All of a sudden, I felt something jerk me and bite,” Robertson said.

At first they thought it might have been a jellyfish, until they saw the teeth marks on her leg.

“I really didn’t want to look at it,” Robertson said. “I’ve never seen anything like that before and it hurt really bad.”

The friends rushed back to shore and Robertson’s boyfriend wrapped the wound in a towel. She was taken to UTMB in Galveston. Robertson said the event has traumatized her and that she will never go that deep into the water again. However, the aquarium curator at the Houston Zoo, George Brandy, says the swimmers shouldn’t fear being attacked again in the water.

“There probably was a school of fish moving amongst the lady’s legs and the shark couldn’t see well because of the murky waters at this time of the year and it just mistook her for a prey item when he bumped into her,” Brandy said. “It’s not necessarily the case that you will see more of these. It’s just that the circumstances were right, unfortunately, for the lady were right, for that animal to bump into somebody.”

Robertson’s bite was only one centimeter deep and did not receive stitches for risk of infection.

Shark attacks in the waters along the Texas Gulf Coast are not common, but also not unheard of. 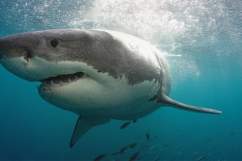 Loading more stories
wpDiscuz
0
0
Would love your thoughts, please comment.x
()
x
| Reply
A teenage boy was bitten by a four foot shark at Surfside Beach in Texas on Monday, just a few weeks after a college student was attacked near the same beach.