Just days after the Syrian army pushed the rebels out of the strategic city of Qusair, sources within the Syrian army are claiming that “Operation Northern Story” will attempt to take the city of Aleppo within the coming hours or days. Aleppo is Syria’s largest city and the sight of some of the most bloody violence during the conflict. 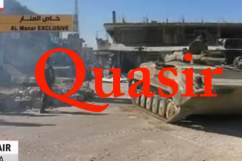 The BBC reports that the Syrian security forces are planning to launch a major assault of the city within “coming hours or days.” The Northern part of the country has been predominantly in the control of the rebel forces but this weeks losses may be enough to turn the tide in that region.