“Our police, our security forces are doing their jobs, if it’s not enough then the gendarmes will do their jobs. If that’s not enough… we could even use elements of the Turkish armed forces.”- Turkey’s Deputy Prime Minister

Deputy Prime Minister Bulent Arinc said on state-run television that Turkey could deploy its army to help quell anti-government protests. This is the first time the possibility of military intervention has been mentioned. Two weeks of violent confrontation have plagued Turkey protests to redevelop Istanbul’s Gezi Park, on the city’s central Taksim Square snowballed into nationwide anti-government protests following heavy-handed crackdown from police forces. What does this new development mean for the confrontation?

Turkey — which represented a country of stability in a tumultuous region — now faces its own delicate conflict.

Here are the facts you need to know about this new development in Turkey’s situation. 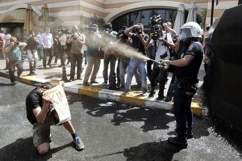 1. Army is Seen as a Bastion of Secularism

Prime Minister Recep Tayyip Erdogan’s move towards religious conservative reforms in Turkey’s historically secular population is at the center of recent government protests. Now, the symbol of secularism may be used against protesters who seek to conserve it. Most secular, Western-minded Turks see Erdogan’s party (the AK) as an existential threat to the republic’s secular structure, believing AK is trying dictate its conservative values on the whole of Turkish society.

Recent restrictions on alcohol include: forcing stores selling it to close by 10pm, banning the advertisement of alcoholic products, and prohibiting alcohol licenses for businesses within 100 metres of places of worship or education.

The Turkish government has also suggested criminalizing adultery and abortion, but stepped back after public uproars.

2. Interior Minister Said the Use of the Army Would be “Quite Normal”

The deployment of gendarmes – a military unit under control of the interior ministry in peacetime – shocked some protesters in Istanbul this weekend. In a separate interview, Interior Minister Muammer Guler stressed that he had not called on the army to help police the protests. But he argued that the use of the gendarmerie was “quite normal”, the Turkish newspaper Hurriyet reports.

3. Prime Minister Has Been Very Harsh Against Protesters

The Prime Minister has downplayed the mass anti-government movement, rebuking the so-called “Gezi Park protests”. “We won’t do what a small number of looters have done – they burn and destroy,” Erdogan said on Sunday from the southern province of Adana. In a separate speech, however, he called on the protesters to stop the rallies warning, “Or else I will have to speak the language you understand. Patience has an end to it.” Erdogan also told hundreds of thousands of supporters at a rally in Istanbul on Sunday that protesters were manipulated by “terrorists.”

4. This Could Mean Escalated Confrontation and Violence

So, we have protesters protesting police violence and the government’s brutal crackdown and the response is more resistance? It seems counterintuitive as with more police repression, more protests have ensued. It looks like this might just feed the fire.

The division between seculars and conservatives is now more pronunounced that ever. Supporters of the government have lauded the Prime Minister for uniting conservatives under one roof. Having said that the secular, Western-minded Turks see Edrogan’s move towards conservative reforms as stifling. Now with the recent police crack-down and strikes, the divide is more palpable than ever. Could this mean the government will use its forces to target secular Turks?

Loading more stories
wpDiscuz
0
0
Would love your thoughts, please comment.x
()
x
| Reply
More fuel is being added to the fire engulfing the streets of Istanbul.