The documents reveal the final two years of correspondence between the Ministry of Defense’s UFO Desk (from late 2007 until November 2009) and concerned private citizens utilizing the Freedom of Information Act instated by Tony Blair, to gain access to files regarding UFOs they otherwise would not have had access to.

Tony Blair himself was briefed about the UFO documents by the Ministry of Defense, who were concerned about the increased time and resources that would be diverted to manning the UFO hotline due to the Freedom of Information Act. UFO inquiries doubled in 2008 and tripled in 2009. According to the Ministry of Defense, this was the reason for the November 2009 closure of the UFO desk.

According to David Clarke, Senior Lecturer in Journalism at Sheffield Hallam University and author of The UFO Files: The Inside Story of Real-Life Sightings, who can be seen in the above video, the increased interest in UFO sightings can be attributed to the following image.

The image ran in the front page of a June 2008 issue of Britain’s infamous tabloid The Sun and was taken by a corporal on his mobile phone from the Royal Irish regiment in Hill Barracks Shropshire. While the image was later attributed to Chinese lanterns in the area due to a wedding celebration, Clarke views the running of the tabloid image as a catalyst for increased inquiries to the Ministry of Defense’s UFO desk.

Despite apologists trying to make light of the documents and the stories within them, there are some legitimately fascinating tales in here. Whether they hold any truth to them is up to the viewer, but UFO conspiracies always will hold interest in the public eye.

The sightings include a letter from a schoolgirl in Altrincham, Greater Manchester, reporting a sighting with her dad. Other interesting stories are correspondence from a man in Carlisle who thought he was living with an alien, and a man in Cardiff who claimed a UFO abducted his dog.

The rest of the files are available for download.

The National Archives claims that all 10 clusters of files have accumulated more than 4.7 page views by more than 3 million visitors from more than 160 countries around the world, making the interest in UFO sightings far from over. 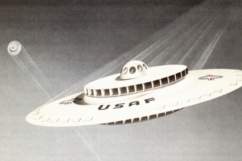 Loading more stories
wpDiscuz
5
0
Would love your thoughts, please comment.x
()
x
| Reply
The UK Ministry of Defense has just declassified the 10th and final batch of UFO documents. Here's what you need to know.