The FBI is packing up their shovels this morning as the most recent hunt for the body of Jimmy Hoffa comes to an end. This search, which began earlier this week, was triggered when 85-year-old Michigan mobster Tony Zerilli tipped off the FBI as to where Hoffa had been murdered an buried after he disappeared in 1975. 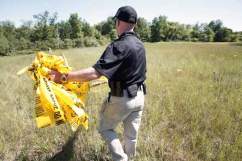 Starting Monday, the FBI started coming through a field in Oakland Township, Michigan about 45 miles north of Detroit. Robert Foley, The Director of the FBI’s Detroit branch made an official statement this morning saying:

We did not uncover any evidence relevant to the investigation on James Hoffa…I am very confident of our result here after two-days-plus of diligent effort…As of this point, we’ll be closing down the excavation operation

Loading more stories
wpDiscuz
0
0
Would love your thoughts, please comment.x
()
x
| Reply
The most recent search for Jimmy Hoffa's body finishes empty-handed as the feds leave the field in Oakland, Michigan outside Detroit.