Putin with his estranged wife Lyudmila

After attending a ballet at the State Kremlin Palace on Thursday evening President Vladmir Putin and his wife Lyudmila gave an interview on the “Russia 24” TV channel announcing their divorce. The ex-Mrs.Putin said that the separation was “civilized” and the couple would “always remain close.” Regardless of how “peaceful” the split has been, it is no secret that their 30-year marriage has been plagued with rampant rumors of infidelity, separation and abuse.

1. Vladmir Putin is a Ladies Man

Putin has been linked to many a lady-friend. Rumored exes have included high-profile women such as gymnast Alina Kabayeva and ex-spy Anna Chapman. The president was also rumored to have been involved with his personal photographer Yana Lapikova.Putin has denied all allegations.

According to German secret service documents, Vladimir Putin reportedly “had numerous sexual affairs” when he was a high-ranking KGB officer in Dresden.

2. Lyudmila Is Rarely Seen in Public

Lyudmila is rarely seen with her husband and there are frequent rumours that the couple had already separated. Russians are mostly indifferent to the wives of their leaders, and in turn the first ladies rarely seek or share the limelight with their husbands. But even by those standards, Vladimir Putin’s wife has always been a shadowy figure. It was also reported that the president would not spend religious holidays or birthdays with his wife.

3. Putin is a Rumored “Wife Beater”

During his time heading up KGB operations in East Germany, Vladimir Putin was described as a “philanderer and a wifebeater” in reports compiled by a German spy agency. While he was stationed in Germany, Putin was investigated by a German Agent. While masquerading as a translator, the agent became friends with Putin’s with Lyudmilla who proceeded to reveal her “husbands abuse and disloyalties.”

One of the few photos of the Putin family

Unlike First Ladies and spouses of heads of states in other nations, Lyudmila maintains a low profile on the Russian political stage, generally avoiding the limelight except as required by protocol and restricting her public role to supportive statements about her husband. Putin’s two daughters (Maria born 1985 and Yekaterina born 1986) are also a media mystery, and according to Daily Mail, no photographs of the couple’s daughters have ever been published in the Russian media even though they are both in their mid-20s and their father has been president for most of their lives. Not even a family portrait has ever been issued.

5. Putin is an Internet Sensation

In contrast to the rest of his family, Putin is a media magnet. Putin-themed images, photos and videos have swept across the internet – making the Russian president one of the most meme-able Presidents to date.Putin likes to give off an outdoor, sporting, tough guy image in the media, demonstrating his physical capabilities and taking part in unusual activities such as extreme sports and tranquilizing tigers…and polar bears…and he once threw darts at whales. According to Wired, the newly divorced president “deliberately cultivates the macho, take-charge superhero image”. 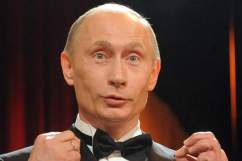 Vladimir Putin and his wife are divorcing. At this time he asks that you respect his privacy in a way that he never would.