The hate-filled holy rollers are at it again, after gaining some attention for calling Taylor Swift a “whore.” The Westboro Baptist Church now seem to think that an historic meeting between the ailing Nelson Mandela and Barack Obama is the perfect time for the “church” to promote their twisted view of South Africa.

According to the section dedicated to South Africa on their website (we’ve looked at it so you don’t have to), they believe the country is: 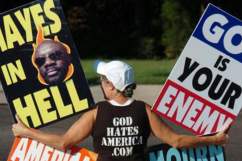 They go on to say:

South Africa has led the world in promoting and institutionalizing fag filth. Their Constitution was the first in the world to prohibit discrimination on the grounds of sexual orientation.

On November 30, 2006, the Civil Union Act was passed which legalized same-sex marriage in South Africa. This was the 5th such law in the world. There are also laws at every level of government, that apply to both the public and private sectors, which prohibit a person from discriminating against fags in any way in an effort by the government to promote equality read that force everyone to bow down and kiss fag ass.

Indeed. For more on WBC: