Tragic news emerged from outside Yosemite National Park in California today that Annais Rittenberg, a camp counselor, died after a large tree fell at a summer camp.

Here is what you need to know about this terrible accident:

1. She Died at Camp Tawonga

Rittenberg was a camp counselor at Camp Tawonga, located on the outskirts of California’s Yosemite National Park. It’s a Jewish sleepy-away camp that generally houses about 250 campers. 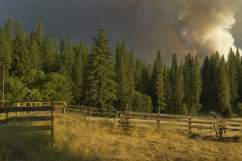 Death & Injury After Tree Falls at Summer Camp in California

2. A Tree Fell as People Were Eating

Rittenberg was killed when a large tree fell as, children and counselors were gathering and eating around a campfire. According to NBC Bay Area, the camp’s director has written a letter to Rittenberg’s parents saying that she was a “beloved member of the Camp Tawonga staff.”

3. She Was From New York

Annais Rittenberg was from New York City. She attended Fiorello H. LaGuardia High School for the arts at Lincoln Square and graduated in 2010.

Emerging from a high school for the arts, Rittenberg attended University of California at Santa Cruz, where she studied environmental studies. In September she would have been starting her senior year of college.

5. Many Others Were Injured When the Tree Fell

According to Bay Area NBC , two other camp counselors, whose names have not been released, but are aged 20 and 21, have been taken to a local hospital with minor injuries, and two other patients in unknown conditions were taken farther away for treatment. No children were hurt during this incident.

Death & Injury After Tree Falls at Summer Camp in California