According to Carlos Ortiz, the man believed to be in the car with Odin Lloyd, Aaron Hernandez and Ernest Wallace on the morning before Lloyd’s murder, Wallace told him that Hernandez admitted to shooting Lloyd, reports the New York Daily News.

Court documents released Tuesday afternoon revealed that Ortiz told Massachusetts investigators that Wallace told him that Hernandez admitted to shooting Lloyd. Ortiz also gave an account of Lloyd’s death: The 27-year-old told police that the three men picked up Lloyd at his home in Boston and they all headed towards Hernandez’s home in North Attleborough, Massachusetss. Ortiz said Hernandez was upset that Lloyd had been “chilling” with people he didn’t like, but the two shook hands and everything seemed fine. The car stopped and the three men got out to urinate while Ortiz stayed in the car. According to Ortiz, he heard gunshots before Hernandez and Wallace got back in the car without Lloyd and sped away.

“All we’ve done is charge is Aaron Hernandez with murder,” Bristol County District Attorney Samuel Sutter said Monday. “As far as the specifics about who was the shooter and who might have been a joint venturer, it’s too early to say. The investigation is ongoing.”

According to Chris Dearborn, a criminal law professor at Suffolk University in Boston, Ortiz may be offered immunity to testify against Hernandez. 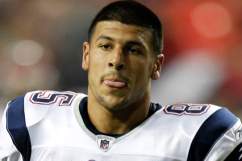