DJ Hernandez , 27, the older brother of Aaron Hernandez, the disgraced for New England Patriot who has been charged with the first-degree murder of 27-year-old Odin Lloyd, may have been involved in a brawl on Saturday night. The fight erupted after a group made reference to Aaron Hernandez in a diner, and another group to offense to the remark. Local police believe one of those involved may have been Aaron’s older brother, DJ, reports The Hartford Courant.

Great to finally see my brother. Missed him. Can’t wait to see him ball out tomorrow. pic.twitter.com/YtO7VoMF

1. His Name Was Recently Involved In A Bar Brawl

While it’s not known whether DJ Hernandez was actually even at the Gold Roc Diner in Hartford, Connecticut, the Hartford Courtant reports that a large-scale brawl broke out this Saturday that involved the mistaken identity of Aaron Hernandez, who was mistook for his brother, DJ Hernandez, who looks quite similar to him.

A patron at the bar shouted out “Hey, Aaron Hernandez!”, which promoted a swirling melee that led to the rest of Jesus Agostso and Thomas Miller. Both men claimed that DJ Hernandez was sitting with them at the time, although he was not allegedly involved in the fight itself.

Mysterious indeed. Now let’s unravel some of that mystery behind DJ Hernandez.

2. He Has Multiple Masters Degrees

DJ Hernandez is quite the scholar, and unlike his brother, doesn’t seem to do unintelligent things like get involved in nightclub brawls at every opportunity. Instead of going pro like his brother, Aaron Hernandez, DJ Hernandez chose to further his education. He graduated from University of Connecticut in 2008 with both a Bachelors of Science and Masters Degree in Educational Psychology, and then returned to UConn to get a second Masters degree from the Neag School of Education in school counseling.

Additionally, DJ Hernandez was recognized as Scholar Athlete in 2008 by UConn and had a high enough GPA to make the Dean’s List in both 2007 and 2008. All this while playing and then coaching football. Not bad Hernandez, not bad. 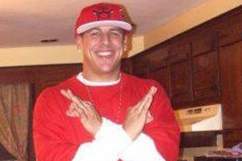 3. He’s a Football Coach at the University of Iowa

After finishing his Bachelor’s Degree at University of Connecticut, DJ Hernandez immediately began putting his degree to good use, and has coached a string of teams, which include the Southington, Conneticut High School Football Team, Carinthian Black Lions in Klagenfurt, Austria (where he also briefly played), and Brown University.

DJ Hernandez then moved to the University of Iowa as an assistant coach after he finished his second Masters Degree. He currently coaches the Hawkeye’s tight ends, and also assists the offensive coordinator in running plays.

Being that he’s a professional football coach, it’s not surprising that DJ Hernandez’s Twitter mainly consists of motivation and strategic thinking. Still, the brother of Aaron Hernandez goes quite a bit overboard with some of his proclamations of self-motivation. Here’s a handful of some of the better wisdom he gives to his followers.

U dont set out to build a wall. U lay 1brick as perfectly as a brick can be laid.U do it every single time N soon U have a wall -Will Smith

HOLD YOURSELF RESPONSIBLE FOR A HIGHER STANDARD THAN ANYBODY ELSE EXPECTS OF YOU, NEVER EXCUSE YOURSELF #IOWAFOOTBALL

Quitting is not an option.When faced wit a challenge,the only way through is ahead. U will find light at the end of the tunnel #IowaFootball

@DailyWooden: “Success comes from knowing that u did ur best to become the best that you are capable of becoming.” #Iowafootball #NoDaysOff

Although clearly intelligent, DJ Hernandez is not exactly a paragon of integrity. While he’s far from the level of orchestrating or conspiring to murder someone, DJ Hernandez did hit a snafu when he coached the Southington High School Football team. In 2010, Hernandez was accused of stealing the playbook of a rival High School team, which is the equivalent of robbing a pizza place for all the garlic knots they have. DJ Hernandez admitted to the charge, and was suspended as coach, but it didn’t seem to have any lasting effect on his career.

Still, DJ Hernandez seems to be a lot better of a person than his brother, and there were certainly no instances of him running on the field and shooting anyone.