Boston bombing suspect Dzhokhar Tsarnaev appeared in court today in Boston’s Moakley Federal Courthouse. This was his first public appearance since he was captured after a prolonged and violent manhunt that occurred in April. CBS Boston described Tsarnaev as seeming confident and perhaps even medically sedated.

Here we go…Tsarnaev is in court with a cast around his wrist. Orange jumpsuit unbuttoned. 30 victims and family members in court.

#Tsarnaev came in strutting and appeared to smirk at the hushed group. His hair frizzy and mussed.

Here is what you need to know about this emotional event:

1. He Pleaded Not Guilty

As the judge read out the charges Tsarnaev leaned toward his microphone and repeated the words “not guilty” 7 times while the charges were being announced.

2. He Blew Kisses to His Sisters

Tsarnaev glances back and blew a kiss to family

Tsarnaev’s two sisters attended the arraignment and were reportedly very emotional. During the proceedings, he apparently turned around many times, smiled at his sisters, and even blew them kisses.

One sister crying, the other praying

3. Around a Dozen Supporters of Tsarnaev Attended

Around a dozen people held signs and wore tee-shirts both outside and inside the courthouse proclaiming that Tsarnaev was innocent and expressing their support for him. Watch above as some of these Tsarnaev supporters clash with an onlooker.

4. The Trial Will Take Three to Four Months

5. All Court Documents Could Be Opened

Judge says this court frowns upon sealed documents, and she will lpok at that for public right to know

The judge said during the proceedings that she does not believe in closing documents so there could be a chance all of the documentation associated with the trial could be open to the public.

The next meeting for this case will be September 23. 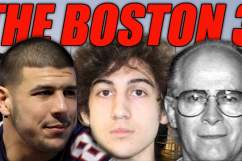