Twitter is reacting to the firestorm Rolling Stone magazine caused when it revealed that its cover would be a large picture of ‘Boston Bomber’ Dzhokhar Tsarnaev. In a relaxed reclining pose, long shaggy hair and a slight goatee, Tsarnaev looks more like a boy-band icon than he does a terrorist. Rolling Stone has announced that they will not pull the cover.

Here are some of the tweets reacting to the strange depiction:

"I’m on the cover of Rolling Stone. I look pretty good" is never something a terrorist should be able to say. Really gross, Rolling Stone.

I just saw the new cover of Rolling Stone and I’m horrified. Evil people should not be glorified or spot-lighted. We should glorify people–

…really, rolling stone? print journalism is spiraling downward if they have to resort to glamorizing truly bad people for publicity.

All I can do is groan at Rolling Stone. How’s that whole being a magazine thing working out for you? Clearly in need of sensationalism I see

Please, continue to tell me how you’re going to boycott Rolling Stone when you've never read it in the first place. Go on. Tell me.

Just cancelled my subscription to Rolling Stone. Funny, they used to be a music magazine.

So what I'm gathering is that @RollingStone has Joe Jonas on their cover and they’re calling him "The Bomber" and that’s why we’re upset?

.@RollingStone When did the MGMT dude go solo? #ElectricFeel 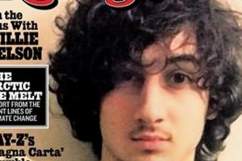 Loading more stories
wpDiscuz
0
0
Would love your thoughts, please comment.x
()
x
| Reply
Twitter is reacting to the controversial firestorm the Rolling Stone created when it put an favorable-looking photo of the 'Boston Bomber' on their cover.