Maduro announced the news at a military parade commemorating Venezuela’s 202nd anniversary of independence. He said Snowden, who has been hiding from the Obama administration ever since he revealed a secret U.S. surveillance program, could love “in the fatherland of Bolivar and Chávez free of imperial North American persecution.”

“I announce to the friendly governments of the world that we have decided to use international humanitarian rights to protect Snowden from the persecution that the world’s most powerful empire has unleashed against a young person who has told the truth,” Maduro said in a speech in Caracas.

Maduro did not say, however, how Snowden would get to the country. The NSA leaker has been stranded in Moscow’s Sheremetyevo Airport since landing there from Hong Kong on June 23, but Venezuela has close diplomatic ties to Russia’s president, Vladimir Putin, who has shown is willing to go to great lengths to counter U.S. influence.

Not long before Maduro announced the news did Nicaraguan President Daniel Ortega also offer asylum to Snowden. The 30-year-old has been denied asylum to 21 countries to which he applied last week. 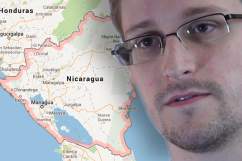