With a verdict looming on the horizon in the George Zimmerman murder case, south Florida police departments have put out a PSA urging people not to “throw rocks, be a rock” and other not-so-coded language discouraging a potential race riot if Zimmerman is acquitted.

The video and the second one you can watch here, which you can watch above, features a white sheriff surrounded by a group of predominately African-American teenagers beseeching the viewer to “raise your voice and not your hands” when something about society is upsetting. They even get Miami Heat basketball player James Jones to say a few words. No one sounds enthusiastic about being in this video, not even the two kids rhyming at the beginning saying things like, “Let’s give violence a rest because we can easily end up arrested.”

With the verdict coming, we wanted to get ahead of the curve and not wait until something happened. We want to get people talking now. We know the power of social media. We aren’t sitting here with our arms crossed just waiting for something to happen

Could putting such an emphasis on riot prevention before the verdict is decided create a self-fulfilling prophecy? We’ll have to get back to you after the results.

It's obvious that the media wants a good old fashioned race riot to cover. 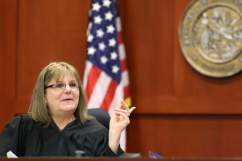 Judge Grills Zimmerman on Whether He Wants to Testify