AMAZING PIC: Huge smoke plume during an hour & a half of explosions at FL gas plant (Pic:Tyler MacKenzie Photography) pic.twitter.com/D2gG8TH1IF

A series of large explosions that could be felt miles away rocked Lake County, Florida Monday night with multiple injuries reported, according to the Orlando Sentinel.

Shook my house and I live at least 4 miles away. #lakecountyfire

The explosions began around 11 p.m. in Tavares at a gas plant called Blue Rhino. Twenty-four employees were working the night shift at the time of the explosions, seven whom were transported to area hospitals. A Lake County Sheriff Official initially reported that 15 workers were unaccounted for, but they were all later found.

BREAKING: Sheriffs Official: Blue Rhino Management says all employees known to have been at FL plant that exploded "have been accounted for"

“At this point we have no fatalities being reported,” said Lt. John Herrell, a spokesman for the Lake County Sheriff’s Office. “Management is comfortable saying all of those they knew were there tonight have been accounted for.”

Areas within one mile of the plant were evacuated.

“I heard loud boom sounds,” said Lisa Garner, 43, who lives close to the plant. “I thought somebody ran into my house.” 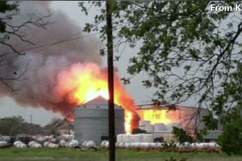