Today NASA reported that a spacewalk on the International Space Station being carried out by American astronaut Chris Cassidy and Italian astronaut Luca Parmitano was ended prematurely.

Here is what you need to know about this averted space crisis:

1. There was a leak in Luca Parmitano’s Helmet

Luca Parmitano preparing to travel to the International Space Station on May 28, 2013 (Getty)

According to NASA, Luca Parmitano, 36 was never in immediate danger but a little over an hour into the space walk, Parmitano reported that there was water floating around inside his helmet. They then returned to the station and terminated the spacewalk. The unaffected Cassidy carried out all of requisite steps for securing the airlock.

2. Parmitano and Cassidy Did a 1.32 Hour Spacewalk

The spacewalk, which has been planned for weeks, was set to begin at 8:10 a.m. EDT but actually began at 7:57 a.m., and was supposed to last 6 hours and 15 minutes. However, due to the helmet leak, the walk ended after only 1 hour and 32 minutes. The crew returned to the space station at 9:29 a.m., according to NASA. 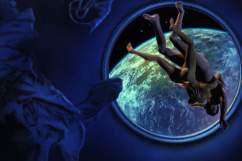 Sex in Space May Cause Cancer & Alzheimer’s, Says New Study

3. The Spacewalk was to Prepare for an Incoming Shuttle

According to NASA, the two had a number of tasks to accomplish outside of the station in preparation for the arrival of a new “Russian Multipurpose Laboratory Module” which will arrive at the station later this year. These tasks were to:

replace a video camera on the Japanese Exposed Facility experiment platform, relocate wireless television camera equipment, troubleshoot a balky door cover over electronic relay boxes on the station’s truss and reconfigure a thermal insulation over a failed electronics box that was removed from the station’s truss last year.

4. They are Doing Research on Controlling Autonomous Space Vehicles

One of the bigger experiments currently being carried out during expedition 36 of the International Space Station is the “Supervision of Autonomous and Teleopterated Satellites-Interact research” which is aimed at trying to improve the control capabilities of far away vehicles, whether they be on Mars or at the bottom of the ocean.

5. Parmitano Will be up there Until November

Parmitano, an Italian Air Force pilot, flew up to the International Space Station for with two other replacements for Expedition 36 on May 28, 2013. He and his two companions will stay on for Expedition 37 and return to Earth when they are replaced in November.

There are usually 6 people, two groups 3, in the station at a time. Each group stays for two “expeditions” which generally last around 3 or 4 months.