Authorities arrested a man after he was spotted on the University of Washington campus in a stolen truck carrying multiple explosives, reports NBC News.

Justin Miles Jasper, a 21-year-old Nevada native, was spotted by police on Wednesday and was arrested a few blocks away from Seattle Children’s Hospital, said John Vinson, chief of the University of Washington police. The pursuit was categorized as “high-risk” and he was taken to King County Jail on suspicion of possessing an incendiary device.

Investigators are not sure of what Jasper’s intentions were.

Authorities first investigated Jasper when they found him sleeping in the truck, but let him go after a background check came up clear. The next day, the truck came up as having been stolen and when police encountered the man again they went after him.

He was found with multiple explosives, stolen firearms and body armor. The explosives included “very well made” Molotov cocktails.

Authorities are carrying out an investigation into the matter, but believe that there is no longer a threat to the area. 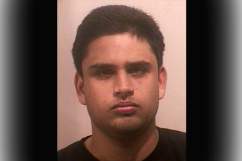 Loading more stories
wpDiscuz
0
0
Would love your thoughts, please comment.x
()
x
| Reply
Authorities arrested a man after he was spotted on the University of Washington in a stolen truck carrying multiple explosives.