Matt Bevin, a Kentucky businessman, is set to announce his campaign to run against minority leader Mitch McConnell for his Senate seat in 2014. Rumors about his campaign have been surfacing quietly for months, but Bevin will be making himself public in the next week. The Bevin campaign has already announced a press conference in Frankfort, Kentucky for Wednesday.

Here are five fast facts you need to know about Matt Bevin.

1. Bevin Is Running to Unseat the Minority Leader

The big reason this campaign will be making headlines in the coming weeks and months is that Bevin will be running against minority leader Mitch McConnell. McConnell has been the minority leader of the Senate since 2007. He is also the longest serving senator in Kentucky history. If that’s not a big enough hurdle, McConnell is also the 4th highest ranking member of the Republican Party. Bevin, a father of nine, has an uphill battle in front of him, but the implications if he wins will ripple throughout the minority ranks.

He will also be running against Democratic candidate Alison Lundergan Grimes for the seat. 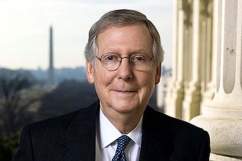 Matt Bevin is a partner at Waycross Partners, a Louisville, Kentucky based hedge fund. Before that, he was the CEO of another Kentucky-based investment management firm called Integrity Asset Management. Even before that he worked at multiple other corporations, including INVESCO-NAM as the Director of Product Management, Marketing Director and Principal at National Asset Managemen, and Vice President with Putnam Investments. Its clear that he has the portfolio to successfully run a corporation, but he is yet to be proven has a government leader on the scale of government that he is running for.

3. Bevin Is A Member of the Tea Party

To make things even more interesting, Matt Bevin is also a popular member of the Tea Party. Honestly, at this point there isn’t a lot of information available regarding his political leanings. What we do know is that according to the Federal Election Commission, Bevin donated $9,000 to the Kentucky Republican Party at the end of 2012. This made him the fourth largest state GOP contributor at the time.

With reports that the Bevin camp have begun reserving ad space for this week, it is thought that he will be making his official campaign announcement on Wednesday. According to POLITICO, the Bevin Campaign has reserved TV advertising space this week in Kentucky. He will reportedly be launching a 3-day, 8-stop tour of his home state after the formal announcement Wednesday.

5. There Is Already A Scandal Involving The Bevin Family Business

Some Tea Party supporters criticize Matt Bevin because of a mini-scandal involving his family business, the Bevin Bros. Manufacturing Co. The 180-year-old company produces bells in East Hampton, Connecticut. After devastating fire burned down the company’s factory in 2012, the company was left with ruin due to their lack of insurance. Bevin Bro. accepted tax payer money from the state to help rebuild their production building.

The McConnell campaign has been quick to fire back. Its campaign manager, Jesse Benton has this to say about the emerging Senate hopeful:

Bevin is not a Kentucky conservative, he is merely an East Coast con man.

Share Tweet Email
Read More
5 Fast Facts, Government, Kentucky, Mitch McConnell, Politics, Republicans, Tea Party
Matt Bevin, a Kentucky businessman, is set to announce his campaign to run against minority leader Mitch McConnell for his senate seat in 2014. Rumors about his campaign have been surfacing quietly for months, but Bevin will be making himself public in the next couple weeks.