The NTSB has released some preliminary findings in its investigation into the Asiana Flight 214 plane crash in San Francisco on July 6, 2013.

Here are five facts you need to know about the plane’s approach into the airport and the tragedy that unfolded.

1. The Plane Was Not Experiencing Problems Before the Approach

National Transportation Safety Board (NTSB) Chairwoman Deborah Hersman speaks to members of the media prior to her departure with an NTSB “go-team” for San Francisco to investigate the crash of Asiana Airlines Flight 214. (Getty)

The air traffic control tapes did not record a distress call between the pilot and air traffic controller on the ground. Prior to the botched landing, the flight was not experiencing problems, and there’s no evidence of engine failure.

2. The Plane Came in Well Below Regular Approach Speed

The pilot asked the air traffic controller permission to increase its air speed. Their speed at the time was well below the 137 knots that the flight crew members had discussed with their counterparts on the ground.

3. The Pilot Received Indication the Plane Could Stall Four Seconds Before Landing

A line of policemen walk past tail wreckage from a Boeing 777 airplane that crashed while landing at San Francisco International Airport. (Getty)

Four seconds before the plane was to touch ground, the pilot’s stick shaker (a mechanical device to rapidly and noisily vibrate the control “stick” of an aircraft to warn of an imminent stall) activated. This gave little time for the flight crew to react.

4. The Pilot Called to Abort Landing Less Than Two Seconds Before Touchdown

A Boeing 777 airplane lies burned on the runway after it crash landed at San Francisco International Airport. (Getty Images)

With 1.5 seconds left before the plane was to touch down, the pilot aborted the landing, deciding go around for another attempt. 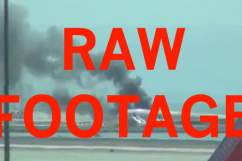 5. The Plane Crashed Before It Was Able to Regain Altitude

As the pilot attempted to abort the landing, a part of the aircraft’s tail hit a seawall at the end of the runway. The air traffic controller quickly declared an emergency and deployed emergency vehicles while speaking to the pilot.