Pakistanis along with international and local media gather outside Osama Bin Laden’s compound, where he was killed during a raid by U.S. special forces, May 3, 2011, in Abottabad, Pakistan. (Getty)

A small group called The Abbottabad Commision was assembled to establish the facts surrounding what happened on the night of the United States’ assault on a compound in the city of Abbottabad, in the Hazara region of Pakistan, which aimed to capture or kill Osama bin Laden.

The commission pieced together information obtained through interviews with Pakistani police and security personnel, local and regional government officials, and for the first time, members of the bin Laden family. The aim of these interviews was to piece together the night in question. Here is the account as seen from the eyes of Osama bin Laden’s wives and children.

It was Amal’s night to be with her husband. The world’s most wanted man’s youngest wife was in their bedroom on the second floor of the building. The elder wives, Khairiyya and “Sharifa” Siham were on the first floor in their small, cramped bedrooms where they had been living for six years. Their son, Hussain, 3, was also in the room, asleep. Amal and her busband had already retired for the night. Just past midnight, they awoke to a loud noise. Taking a look out into the darkness of their balcony they could see nothing to alert them to the imminent attack already underway by United States Special Forces.

Two Black Hawk helicopters, equipped with noise dampening technology and coated in high-tech anti-radar paint and shielding, had already been in the air for about an hour when they entered Pakistani airspace between 11:15 p.m. and 11:30 p.m. They were followed closely by two other Navy helicopters, providing support and resupply for the ride home. Now, over 60 minutes into the journey, the highly trained group were approaching a compound in the city of Abbottabad. The compound, according to U.S. intelligence, is said to house the mastermind behind the 9/11 attacks. 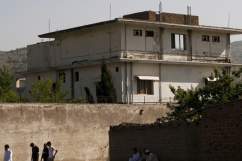 Amal reached for the light. “No!,” said the Sheikh (the name everyone in the compound used to refer to bin Laden (OBL), as to not alert anyone in the outside world or the children in the compound of his true identity). He went to the door to alert his son Khalid, the eldest from his wife Siham. Amal hurried to her five children.

OBL’s two daughters, Maryam and Sumaiya, had come upstairs from their bedrooms. Sumayya, seeing one of the helicopters land from her window, rushed to her father’s side. They were reciting the Kalima and verses from the Quran. The Sheikh called out to his family, alerting them that American helicopters were approaching and that they should leave his room.

Khalid woke his mother, alerting her to the landing helicopters outside the compound. He grabbed his weapon and ran to his father’s side. Sharifa quickly dressed and tended to her children.

Khairiyyah, OBL’s oldest wife, saw the soldiers entering the courtyard wearing masks. In unison, blasts were heard from outside the house and noises on the roof indicated the beginning of an assault on the compound. After releasing troops onto the roof, according to the report, one of the two stealth helicopters experienced either “unanticipated weather stroke temperature conditions or it developed some technical fault.” This resulted in the aircraft making a “hard landing,” rendering it incapable or unable to take off or fly again. The other chopper dropped its SEAL payload on the western side of the main house. The team assaulted the compound’s annex, housing OBL’s body guard couriers and their families, before continuing on to the main house.

Minutes later, the soldiers forced their way into the main building, on the top floor of which Osama bin Laden was said to be living. They made their way into Khairiyyah’s room. Upon seeing the first member of the assault team, she recalled the frightened look on his face. He “looked as if he had seen a witch,” she said. The soldier roughly searched her and took her to a room with the other women. More Americans entered the room and began asking the women whether this was the residence of Osama bin Laden.

The next sequence of events happened quickly. Amal turned to the doorway where an American soldier stood at the top of the stairs, pointing a gun at OBL. With his red dot indicator on her husband’s body, she ran toward the soldier, grappling with him, screaming and attempting to take his weapon. The man fired a round into her knee and pushed her onto the bed.

The women did not see him fall, but Sumayya turned to see her father on the floor with a bullet hole in his forehead, blood flowing “backwards over his head.”

Soon after, the women from OBL’s room were brought downstairs with their hands tied behind their backs. That’s when Sharifa saw the body of her son, Khalid, lying on a pool of blood on the stairs. She knelt to kiss his forehead.

Sharifa was still in the room on the first floor with her children when an American entered and began extracting a hard disc from a computer. Another entered the room and shared the news of what happened on the floor above. 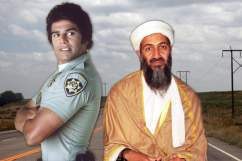 Amal could not see anything, but only heard as the soldiers loudly asked her daughters the name of the Sheikh. Overwhelmed, Sumayya answered, “my father.” The soldiers told them to stand in a corner. Before she had time to gather herself, her father’s body was gone.

The soldiers soon ushered the women downstairs into one of the small rooms. Some time passed before a large explosion shattered the windows of their building. This explosion is assumed to be the destruction of the downed stealth helicopter.

Another hour passed before the Pakistani Army arrived.

It took less than 10 minutes between the time the people on the compound were awoken to the killing of the man they lived to protect. According to the report, the world’s most famous fugitive, along with his son Khalid, two brother courier/bodyguards, Abrar and Ibrahim Saeed Ahmed, and Abrar’s wife, Bushra, met their end in Abbottabad by 12:50 a.m. on May 2, 2011.

Read More
Abbottabad, Osama bin Laden, Pakistan, Terrorism
wpDiscuz
0
0
Would love your thoughts, please comment.x
()
x
| Reply
Here is the account, via The Abbottabad Commission, by Osama bin Laden’s wives and children of the raid that killed the world's most wanted man.