Ricardo Martinelli, the president of Panama, tweeted this morning that the Panamanian government had captured a North Korean cargo ship heading from Cuba back to North Korea. Upon searching of the ship, the police discovered undeclared military equipment hiding in containers beneath large stores of Cuban sugar. You can see a picture of the discovered military cargo in the picture above.

AFP identified the military cargo as, “sophisticated missile material,” and quoted President Martinelli as saying, “The world needs to sit up and take note: you cannot go around shipping undeclared weapons of war through the Panama Canal.”

This event comes in the wake of a letter published by Fidel Castro earlier this year in the Cuban Communist Party’s official daily periodical, Granma. Castro addressed his regular column to North Korea saying that while the two countries have always been close allies, Cuba urges North Korea not to utilize any atomic bombs it may have. 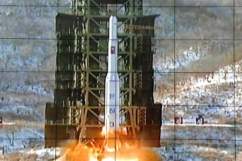 North Korea Missile Test May Be Imminent: 5 Fast Facts You Need to Know

Loading more stories
wpDiscuz
0
0
Would love your thoughts, please comment.x
()
x
| Reply
The Panamanian President Ricardo Martinelli said that he has captured a hidden cargo of 'missile material' being shipped from Cuba to North Korea.