“Many casualties” are being reported from an horrific train derailment in Brétigny-sur-Orge, in the Essone district, a suburb of south of Paris, reports France 24.

The train was carrying around 350 people when it crashed, some outlets are reporting that number may be as high as 370, reports RT. The BBC reports that SNCF, the company that operate the train, say there were 385 on board.

Tearful Guillaume Pepy, head of SNCF, says 370 people on #Bretigny train, death count will be given by judicial authorities in coming hours.

1. Reports Vary on the Number of Dead So Far

According to the BBC, reports from the scene say that victims were “electrocuted and crushed.”

Reports from the scene say that people are still trapped inside the train.

2. People Were Electrocuted While They Waited on the Platform

Those who were electrocuted are believed to have been people on the platform waiting for other trains. The train was heading away from Paris and was en route to Limoges, a journey of about 250 miles, when it crashed into a station platform at around 5:15 p.m. local time.

Bretigny Mayor Michel Pouzol has said that four of the carriages jumped the rails and landed on the platform. Another local politician, Bernand Decaux, said:

Everyone is running in every direction, there is panic, it is an apocalyptic scene. We are trying to organise things.

3. The Train Split in Two

The train arrived at the station at high speed. Has been split into two for an unknown reason. Part of the train continued to roll while another is lying on its side on the dock

A Corail train entered the station in Bretigny he went rather quickly, as a train enters the station without being supposed to stop. Suddenly we heard an explosion, we saw dust, pebbles that jumping around. train derailed (…) Power lines were ordnance, concrete blocks were detached from the dock….

We started to see people out of the cars. There were many wounded people. Approximately 150 by eye were supported by the rescue in a reserved area. There have been clashes between the injured and the people who were taking pictures on the dock. But it was pretty well organized, there was a large deployment of police officers and a mobile command post was set up

4. The French Ministry for the Interior Have Begun the ‘Red Plan’

This plan, according to Wikipedia, is:

The death toll is evolving constantly at this point and unfortunately it will probably rise, at this stage there are seven people dead, several dozen wounded and some of them are serious.

French President Francois Hollande has arrived at the train station to help oversee the rescue operation.

Firefighters from Paris have been called into help the overwhelmed fire department in Essone.

5. This is the Second Deadly Train Crash in Less Than a Week

This come less than a week after the train crash in Quebec that has so far killed 24 people and left dozens more missing. In that crash, the CEO of Rail World Inc., the train operator, Edward Burkhardt has said that the train’s engineer, Tom Harding, was at fault for that crash, reports The Associated Press, he said:

It was questionable whether hand brakes were put in place at this time, I don’t think any employees removed brakes. They failed to set the brakes. 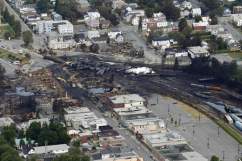 Loading more stories
wpDiscuz
0
0
Would love your thoughts, please comment.x
()
x
| Reply
A train derailed just outside of Paris in the suburb of Bretigny-sur-Orge, south of the city.