A missing 15-year-old Los Angeles girl was used as a sex slave, forced to harvest drugs and kept isolated in a 4-by-2-foot toolbox on a marijuana farm in Clearlake, California.

The girl’s captors are alleged to be Ryan Balletto, 30, and Patrick Pearmain, 24, reports The Los Angeles Times.


You can read the gruesome criminal complaint here:

Here’s what you need to know about these alleged sickos…

1. Neither Has Been Charged With Sex-Related Offenses

Both Balletto and Pearmain have been charged with drug-related offenses, including with conspiracy to distribute marijuana, using a minor in a drug operation and possession of a firearm in furtherance of drug trafficking. They have yet to be charged with any sexual-based offenses.

2. The Girl Was Found Holed Up in a Motel With Pearmain

It’s believed that 15-year-old victim was coerced into calling law enforcement to tell them that she was “OK” just after the Lake County Sheriff’s office contacted Balletto asking about the missing girl. Cops traced the call to a motel in Sacramento. Their room was raided where police found the girl with Pearmain.

Among the items that were in the room: a bag of marijuana, prescription drugs, a script for the girl to read over the phone to cops, a pregnancy test and sketches for a marijuana greenhouse.

3. Feds Have Been Investigating Balletto Since 2011

Photo via CBS News. Just some of the marijuana plants recovered at the farm.

The Department of Homeland Security has been investigating Balletto’s farm since 2011. They conducted numerous flyovers of his land at 1750 Ogulin Canyon Road, Clearlake, California (below). They identified at least two greenhouses that were full of marijuana plants. After the LAPD contacted Lake County Sheriff’s Department about a missing Los Angeles teenager, referred to as “minor” in the criminal complaint, they believed that Balletto had kidnapped the girl. Local law enforcement were familiar with Balletto due to the Homeland Security investigation.

4. This Could Be a Case of Stockholm Syndrome

The girl denied being raped by the men and told police that their sex had been “consensual” — though she’s too young to give consent. She said that the sex with Balletto, age 30, had been “less consensual” and that she had only had sex with him to “help him out.” According to the complaint she told police the men had told her they were on a “mission” and that she was held because she was good at harvesting the marijuana plants and preparing them for sale and distribution.

5. The Box the Girl Was Kept in Was Labeled the ‘Bone Collector’

After the girl was found, Balletto’s farm was raided. In addition to the drugs found at the residence, cops found a box they believe the girl was kept in. It was a 4-by-2 tool box with numerous drawings on the outside including one that labeled the box as “Bone Collector.”

A hose was attached to the box, which police believe was used to flush out human waste. A poem, written by the girl, was found on the property, which described her life in the box. During her month-long torture, the girl spent an accumulative total of three days in the box.

6. Tools Used for Bondage Sex Were Found Near the Box

A wooden board, used in bondage style sex as a rack to immobilize a person, was also found in close proximity to the box. Other sex toys were found nearby, as well as a towel with blood on it. 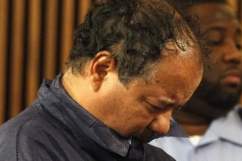 7. Pearmain Was a Heroin User

Photo via CBS News. An image of the farm where the marijuana crop was cultivated.

Patrick Pearmain lived in a trailer on the nearly 700-acre farm. Outside of his home, cops found “well-worn disassembled wood, metal and leather.” Inside the trailer, marijuana plants and seeds were found.

He was previously in trouble with the lawyer for minor infractions. In 2010 after stealing candy from a gas station, Pearmain was pursued by cops who found him in possession heroin and hypodermic needles. At the time, the arresting officer also wrote that he felt Pearmain was under the influence of drugs.

At another house, registered as Balletto’s primary residence, at 7515 Zeno Road, Lakeport, California (above), police interviewed a woman, Christa McConnell, 27, who identified herself as Balletto’s girlfriend. There were five children at the house, all of whom have been taken into protective custody. McConnell opened a gun safe for police; inside cops found “the largest and most sophisticated bulk of weapons seized in recent (department) history,” $4,000 in cash, a human pony-tail and documents relating to the sale and distribution of marijuana.

9. They Allegedly Called the 15-Year-Old a ‘Trooper’

The girl was called a “trooper” by the men for not screaming when she was in the box. She was also told “not to f*ck up,” due to the amount of money at stake.

10. The Two Kept a Huge Arsenal on Their Farm

In addition to the “bulk of weapons” found at Balletto’s house (see Fact 8), cops found a huge armory on the farm, including loaded assault rifles and a pistol under the pillow that Balletto is believed to have used. They also found tactical gear including flak jackets, night-vision goggles and gas masks.

Photo via CBS News. Just some of the weapons recovered by law enforcement.

Read More
California, Crime, Drugs, Marijuana, Sex Crimes, Sicko, Top 10
Follow Heavy ↓
Called a "trooper" by her captors for staying quiet inside the metal box, the girl was caught in a world of weed, guns and horrific abuse.