Police in Bihar, India arrested the principal of the primary school where 23 children died from eating lunch laced with pesticide last week. According to reports, the cooking oil used to prepare the school-provided meal has been “accidentally or intentionally” mixed with a potent insecticide. The principal had been in hiding since the tragedy.

Police have stated that Meena Devi — the principal of the school  — was arrested as she was on her way to court to file an anticipatory bail. Devi allegedly fled as soon as the children began getting sick. The principal has been charged with gross negligence in running the mid-day meal leading to the contamination of the cooking oil with “organo phosphorous”.

Bihar’s education minister, P.K. Sahi, has said the principal bought the ingredients for the meal from a shop owned by her husband who is still in hiding. According to some reports, police had confirmed that five packets of pesticide were also recovered from Devi’s home.

Meanwhile, in the state capital Patna, angry protests have been held at the residence of Education minister P K Shahi demanding his resignation. India’s midday meal plan is one of the world’s biggest school nutrition programs. 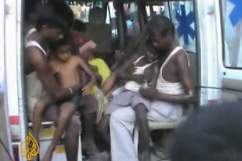 Read More
Breaking News, Deaths, India, International News
The principal has been in hiding since the day of the tragedy...