Egypt continues to faces upheaval following the ouster of President Morsi. Today, the Egyptian military clashed with Morsi supporters and reports surfaced that some supporters of the vanquished president and his political party (the Muslim Brotherhood) were shot and killed. Although the military has denied shooting any pro-Morsi protesters, videos of the chaos reveal the escalating violence in Egypt. Meanwhile, fears of possible civil war percolate as the interim government attempts to rule on shaky foundations.

The video below shows a pro-Morsi protester being shot dead on the street. After running towards security forces, shots are fired and the man suddenly falls to the ground. The camera then pans to the floor where his body lays lifeless in a pool of blood.

Warning: The Video Below is Graphic 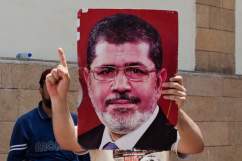 Loading more stories
wpDiscuz
0
0
Would love your thoughts, please comment.x
()
x
| Reply
A graphic video of a Pro-Morsi supporter being shot and killed in a protest has surfaced on the internet