Today the younger of the two brothers accused of carrying out the Boston Marathon bombing on April 15, 2013, will appear in court for the first time. The 19-year-old Dzhokhar Tsarnaev will make his first public appearance since his April 19 capture, to face 30 federal criminal charges, 17 of which could get him the death penalty.

Dzhokhar Tsarnaev's motorcade has arrived at the Moakley Courthouse: pic.twitter.com/pyh7aIxy2t

The public and media are eager to get their first look at the extent of injuries Tsarnaev sustained during the prolonged chase and manhunt that ended with the death of his brother, Tamerlan Tsarnaev, and his capture. The Boston Globe writes that Tsarnaev’s public appearance:

should answer questions about the extent of injuries he sustained during a firefight with police the night before he was captured and how much he has recovered over the past 2½ months.

His presence in court is scheduled for 3:30 p.m. and there is expected to be a very heavy police presence. According to AP, Police bomb sniffing dogs have been searching the courthouse and its exterior since early this morning. Authorities could be worried of an Jack Ruby-Lee Harvey Osawld style retaliatory attack on Tsarneav.

Seats in the courthouse have been set aside for survivors and the general public. 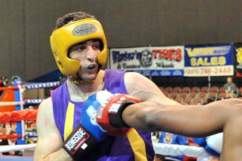