Rashia Wilson, the self-proclaimed “Queen of Tax Fraud” has been sentenced to 21 years in jail and a $3.1 million restitution fee for conducting IRS tax fraud.

Here’s what you need to know about this tax cheat…

1. The Investigation Against Wilson Was Called “Operation Rain Maker”

The two year investigation that lead to Wilson’s conviction was dubbed “Operation Rain Maker,” referring “to all the money raining down on the suspects’ mail boxes,” according to the Daily Mail.

The defense brought a psychologist in to testify in court to testify to Wilson’s bi-polar disorder. They pointing to a bragging Facebook post was a sign of her illness. The expert testified that the condition made her liable to brag.

‘I’m Rashia, the queen of IRS tax fraud,’ read a post Wilson made on Facebook. ‘I’m a millionaire for the record, so if U think indicting me will B easy it won’t, I promise you! U need more than black and white to hold me down N that’s to da rat who went N told, as if 1st lady don’t have da TPD under her spell. I run Tampa right now.’

3. Wilson Was Not Allowed To Hug Her Children Goodbye

After the court ruling, the officers did not allow her to hug her three children goodbye.

‘She knew what she was doing was wrong. She reveled in the fact that it was wrong,’ said U.S. District Judge James. S. Moody Jr., the precising judge in the case. 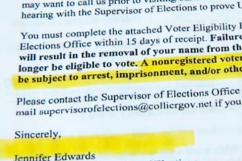 Letters to the Internal Revenue Service are piled up at the U.S. Post Office (Getty Images)

Wilson was given the 21-year sentence for stealing $3 million dollars from the IRS. Along with her sentence, she was ordered to pay $3.1 million in restitution.

The $3.1 million restitution order reflected the estimated amount of money the government lost during Wilson’s fraud scheme at the time of her plea deal. Further investigation found that the figure was actually higher than that figure, but the judge decided to honor the plea deal. The new estimated figure sits at about $20 million.