Top al-Qaeda leader, Saeed al-Shihri has been confirmed dead. Al-Shihri was considered the #2 ranking member of the al-Qaeda In the Arabian Peninsula organization.

1. Al-Shihri Was A High Ranking Member of The al Qaeda In the Arabian Peninsula (AQAP) Organization

Al-Shihri rose to become the number two ranking member of the AQAP after a number of years in US custody. Although he wasn’t an important member of the core al-Qaeda organization, this was a huge blow for the AQAP, who had been “most effective in targeting America,” according to CBS News senior correspondent John Miller. Washington has also called the AQAP “Al Qaeda’s most dangerous and innovative affiliate.” It is also considered the most active of Al-Qaeda’s branches.

In fact, the AQAP are “the ones who placed an underwear bomb in a plane over Detroit, they’re the ones who developed the printer bomb for three planes bound for the United States and Great Britain. They’re the ones who publish Inspire magazine, which gave the recipe — and, by it’s name, the inspiration — for the Boston Marathon bombings,” according to CBS News senior correspondent and former FBI and office of the Director of National Intelligence employee, John Miller.

2. The Date of al-Shihri’s Death is Contested

An aerial released by the U.S. Department of Defense shows damage to a reported terrorist training camp in Afghanistan. (Getty Images)

In January, Yemen’s official news agency, SABA, reported that al-Shihri died of wounds from a drone strike three months earlier. But al-Qaeda has only acknowledged his death today.

His eulogy, presented by the AQAP’s senior religious figure, Ibrahim al-Rubaish, announced Al-Shihri’s death but provided no specific date for his passing.

This is actually the fourth time the Saudi-born Al Qaeda official has been reported dead. 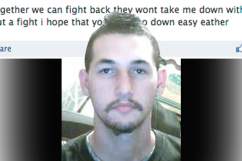 A U.S. Army Military Police checks in on a detainee during morning prayer in Guantanamo Bay (Getty Images)

Al-Shihri spent a reported six year stint in Guantanamo Bay prison after fighting against US forces in Afghanistan. He was released in 2007. He soon fled to Yemen to join the al Qaeda branch located there.

4. Al-Shihri is Known For Involvement With Assassination Attempts And Bombings

It has been reported that al-Shihri is personally associated with multiple acts of terrorism within Yemen. This list includes a failed targeted assassination of the Saudi interior minister, Prince Mohammed bin Nayef in 2009, the kidnapping of foreigners, and the 2008 embassy bombing.

5. Al-Shihri Was Killed By A Drone While Talking On A Cell Phone

It’s not a secret that the US military use techniques that allow them to listen in on cell phone calls of supposed terrorists. They also use these cell phone signals to pinpoint the exact locations of the people they are snooping on. This is how Saeed al-Shihri was killed. It was confirmed in his eulogy video, recorded by AQAP’s senior religious figure, Ibrahim al-Rubaish, and posted on militant websites commonly used by al-Qaeda.