Stephen “The Rifleman” Flemmi stepped into a Boston federal courtroom today to testify against his old friend James “Whitey” Bulger. When asked what his relationship was to 83-year-old Bulger, Flemmi flippantly responded  “Strictly criminal.” After all, the two men were allegedly the most powerful crime lords in Boston before justice caught up to them.

After exchanging hostile glares and obscenities, Flemmi took the stand and told the jury about his and Bulger’s times as FBI informants and top leaders of one of Boston’s most violent mobs. He is set to testify again on Monday. 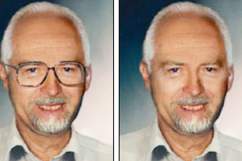 Here is what you need to know about Steve “The Rifleman,” his statement and his involvement in one of today’s most notorious cases.

1. He Detailed for the Jury a String of Grisley Murders Pegged on Bulger

The body of Eddie Connors, of Savin Hill, Dorchester, lies in a phone booth on Morrissey Boulevard after being fatally shot (Getty)

According to the AP, Stephen Flemmi detailed a string of nine murders he says reputed Boston crime boss James Bulger ordered, approved or commited, including the strangling of the Flemmi’ girlfriend. The mobster described Bulger’s alleged role in eight other killings during the 1970s and ’80s when the two men were leaders of the Winter Hill Gang. In one of the slayings he recounted, Flemmi said he and Bulger sprayed a phone booth with gunfire in 1975, killing bar owner Edward Connors.

One of the unsealed photos of evidence recovered from the Santa Monica, Calif. apartment where reputed Boston crime boss James Whitey Bulger lived for more than a decade. The photos show an arsenal of handguns, high-powered rifles and knives along with what appears to be a huge cache of ammunition and a grenade.

2. He Described Bulger as “Overbearing” and “Forceful”

Flemmi took the stand for only 15 minutes before the court adjourned for the day. When the federal prosecutor asked Flemmi to describe Bulger, he responded “overbearing” and “forceful“.

3. He Stated Bulger was an FBI Informant

Flemmi said he was with Bulger and heard him give information to FBI agent John Connolly “hundreds of times” over 15 years.

That comment seemed to anger Bulger, who has insisted that he was never an informant, mentioning to people that being a “rat” was the worst thing anyone could do.

By 1965, Flemmi was a top informant for the FBI. Despite delivering a great deal of intelligence about the inner workings of the Italian Patriarca crime family, Flemmi’s own criminal activities proved a P.R nightmare for the FBI. For this reason, he was ultimately prosecuted.

Flemmi said he was with Bulger and heard him give information to Connolly “hundreds of times” over 15 years.

“Who did most of the talking at these meetings?” prosecutor Fred Wyshak asked.

4. He Claimed The Gang Paid FBI Agents For Tipping Off Investigations

Flemmi said the gang also regularly paid Connolly and other FBI agents for tipping off the gang about investigations. FBI agent Connolly is said to have received about $230,000 in cash during a 15-year relationship.

In 1983, Connolly received two $25,000 payments, Flemmi said. After receiving the second payment, according to Flemmi, Connolly remarked, “I’m one of the gang.”

Bulger’s gang also paid cash to five other Boston FBI agents, Flemmi said on the stand, repeating testimony he gave in other trials.

5. He Claims Bulger Forced Him To Kill His Girlfriend

According to his statement, Bulger “set his “girlfriend’s killing in motion” when he blurted out to her something he shouldn’t have: that he and Bulger were FBI informants.

Flemmi did show a flash of remorse for killing Debra Davis, who was 26. “It’s affected me and it’s going to affect me until the day I die,” he said.

6. He Strangled His Step-Daughter to Death

Flemmi had a “common law marriage” with Marion Hussey, a Boston divorcee with several children. With Marion he fathered two children, Stephen and Robert Hussey, and two daughters. He also became the stepfather of two daughters including Deborah, from a previous marriage.

He bought Deborah Hussey a Jaguar when she turned sixteen, and later he set her up in an apartment in the Back Bay neighborhood of Boston, even as he continued living with her mother in Milton. By the age of seventeen, his stepdaughter had dropped out of high school and gone from working as a waitress to working as a stripper and occasional prostitute.

It is believed that Flemmi, Bulger, and Weeks lured her to the house at 799 East Third Street in South Boston and garrotted her. Her body was then buried in the basement.

The motivation for the murder would only come out later.

7. He Allegedly Had Sex With His Step-Daughter

According to a testimony by Kevin Meeks — a former mobster and confidant to Bulger — Stephen had sex with Deborah Hussey, who was only three years old when he became her stepfather. In an interview for the book Brutal, Meeks described why Stephen killed his stepdaughter:

Stevie said he’d take care of [Deborah’s] clothes and the teeth. He was all business, going about the task of removing cleaning up and pulling teeth. Even though he had a long term relationship with Debbie, this wasn’t bothering him any more than it had bothered Jimmy. Stevie was actually enjoying it, the way he always enjoyed a good murder. Like a stockbroker going to work, he was just doing his job. Cold and relaxed, with no emotion or change in demeanor, he was performing a night’s work. Whether he went out to meet one of his girlfriends or home to Marion, I have no idea. Later on, when I was alone with Jimmy, I asked him what this was all about. ‘Who knows?’ he answered. ‘She was bringing Blacks back to the house. She was doing drugs. Stevie was probably fucking her.’ I never asked again, but it was just kind of distasteful killing a woman. I can see killing guys. That’s the life they chose, the life they’re involved in, the life we all chose. But a woman was different. It wasn’t a nice thing. Years later, it came out that Stevie was in fact having sex with Debbie. And she’d been his stepdaughter since she was three years old. Who knows if she knew anything else about him? But to kill a woman because she threatened to tell that you were fucking her didn’t make any sense, no more than it did to kill a girlfriend because she wanted to leave you. According to Stevie testimony in a later trial, when it came out that he had been having sex with her daughter, Marion tossed his clothes out in the driveway and changed the locks to the house. She didn’t know about the murder, but she knew about the sex. That didn’t make any sense either

8. He Fled the US After Car Bombing a Mobster’s Lawyer

In 1967, after Barboza became a cooperating witness and disappeared into the fledgling Witness Protection Program, Flemmi and his partner Frank Salemme arranged the car bombing of Barboza’s lawyer, John Fitzgerald, who was suspected of persuading his client to testify. Fitzgerald was severely injured, but survived.

In response, Flemmi and Salemme fled Boston. After Salemme was arrested in New York City in 1972, Flemmi fled to Montreal, Quebec.

In May 1974, Rico told Flemmi it was safe to return to Boston, which he did once the charges against him were dismissed. He moved back with his mistress, Marion Hussey, in suburban Milton, Massachusetts.

9. His Own Son Was a Key Witness Against Him

When the department of Justice and the FBI was due to make arrests during Christmas season, Bulger fled Boston. Meanwhile Flemmi chose to remain in Boston, believing he had protection, and was swiftly take into custody. In October 2003, Flemmi pleaded guilty in U.S. District Court in Boston to 10 counts of murder. He made the decision as a part of a deal to reduce the sentence for his brother, Michael Flemmi — a reited Police Officer who was guilty of selling a load of his brother’s stolen jewelry.
Read More
Boston, Crime, Mob, Top 10, Whitey Bulger