One person is dead and at least 35 more have been injured after a head-on train collision in Switzerland on Monday night, reports BBC News.

Two regional trains collided head-on in Granges-pres-Marnand in Vaud canton, about 30 miles south-west of the capital, Bern. Swiss police report that the body of the driver of one of the trains was pulled from the wreckage early Tuesday morning after separating the trains. The other driver was among the injured, five of whom were seriously hurt. 26 people were taken to local hospitals while the rest were treated at the scene.

Investigators have not yet determined the cause of the crash.

“An investigation has already begun,” said Jean-Christophe Sauterel, spokesperson for Vaud Cantonal Police. “Technical experts and federal investigators are at the scene, along with legal teams and accident specialists. At the moment we don’t know exactly what happened.”

Businessweek reports that an unidentified passenger told 20 Minutes that train they were on braked three times before it violently crashed into the other. The trains had a total of 46 passengers who were all Swiss.

Monday’s collision is the latest train crash after a derailment in northern Spain killed 79 people last week. Two weeks before that, six people died when a French train smashed into a commuter station outside Paris. 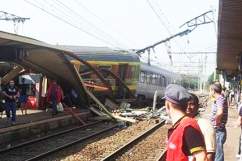