Travis Turbyfill, or “Turby” as he was known to his friends, died at 27 years old on Sunday, June 30. He was one of the 19 elite Granite Mountain Hotshots who died this weekend fighting the deadly Yarnell Hill Fire as it spread through central Arizona outside of the city of Prescott.

Here is what you need to know about this brave firefighter, warrior and father:

David Turbyfill and Shari Turbyfill are the parents of Travis Turbyfill, 27, who was one of 19 firefighters killed battling a wildfire in Arizona. (David Wallace / Arizona Republic / July 1, 2013) 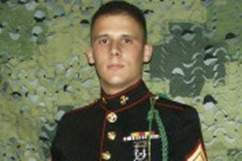 2. He Was a Husband and Father of Two

Turbyfill married his wife Stephanie in 2009 and had two daughters, one is currently 3 and the other, only 1.

3. He Replaced an Old Member Whose Girlfriend Objected

One of the more frequently told stories about the 27-year-old Turbyfill is how joined with the Granite Mountain Hotshots. He reportedly replaced a former member who quit because his girlfriend complained to him about the job, presumably the danger.

4. He Worked Out But Loved Ice Cream

The regulars from Captain Crossfit, the gym Travis Turbyfill frequented, visiting the memorial at the Fire Station. (Getty)

Like Travis Carter, Turbyfill was one of the Hotshots that frequented the Captain Crossfit gym. According to one of the trainers at the gym, Turbyfill had recently been telling people at the gym that would be lessening his workout routine because it was “blizzard week” at the ice cream chain Dairy Queen.