Shocking footage of yesterday’s deadly train crash in Spain has been released, captured by a security camera.

A Spanish train, which was carrying 218 passengers and four crewmen, derailed at 8:41 p.m. local time. It was traveling from Madrid to Ferrol.

According to a local newspaper, the force of the derailment was so great that one train car jumped 15 feet in the air.

The death toll is most recently reported at 78, according to BBC. 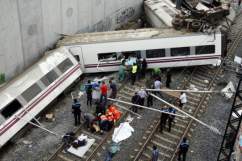 Loading more stories
wpDiscuz
0
0
Would love your thoughts, please comment.x
()
x
| Reply
Security camera footage has been released of the Spanish train derailment that occurred Wednesday. The death toll has been raised to 78.